Paramedic Bradley Dean co-authored this article with David Hughes about Hughes' son Drew, who passed away on June 29, 2013. They write about Drew's death to introduce lessons EMS and other healthcare providers can learn from this incident.

By Bradley Dean and David Hughes

Drew Hughes, 13, died unexpectedly and tragically a few hours after sustaining a head injury while skateboarding. On June 29, 2013 a young life ended. Drew was full of vibrant life that brought laughter and light to all who knew him. Drew pushed himself to be the best that he could be, and his family encouraged him to push the limits.

Every patient is somebody’s father, mother, daughter, or son. This is how Drew died and how his family, trying to bring balance back to their lives, is working to prevent another death.

In the summertime Drew and his friends would ride around his neighborhood, skateboarding from house to house. On June 28, 2013 he lost control coming down a hill and fell backwards striking his head on the pavement. Within minutes, his brother and mother arrived by his side, knowing that he was injured. The 911 call had been placed, and the ambulance arrived. Drew was conscious and alert, but had suffered a head injury and concussion. The local paramedics transported him to the closest appropriate facility.

At the local hospital, a CT scan was performed where everything came back normal with the exception of "a small amount of gas seen within the right temporal and mandibular joints." and though none was seen, the doctors suspected a possible basilar skull fracture.

Drew was conscious and very aware of what was going on and told his dad that he was scared. His father explained that he would be OK, but the unfortunate chain of events that were unfolding became a nightmare that could have been prevented.

Transfer to a higher level of care

The hospital had limited resources for a pediatric head injury and before Drew ever arrived to the ED Drew's father requested that Drew be transferred to a hospital that could thoroughly evaluate Drew. Helicopter resources were unable to pick him up due to bad weather and it was determined Drew would be transported via the hospital's ground ambulance. The only crew working that night was returning from a previous transport. The hospital found a respiratory therapist, nurse, driver and another paramedic to start the transport Drew in another ALS equipped ambulance until they could meet the ambulance returning to change personnel.

During the time that the crew was being assembled for the transport, an elective endotracheal intubation was recommended for Drew’s safety during the 90-minute ride. The family did not understand why he needed to be intubated, because he was talking to them and breathing on his own, but they consented. Drew was intubated and sedated, but the sedation wore off quickly and he extubated himself in the ED. He was re-intubated and sedated for transport.

During the transport, the crew that started the transport stopped to change the driver and attending paramedic with the other crew returning from the previous call. Drew was noted as being highly reactive to stimuli. A few minutes following the change of personnel Drew woke up, sat up and began pulling out his ET tube.

Drew was struggling with the crew to catch his breath. He was awake and breathing on his own, until a paralytic was administered by the paramedic. Drew was now paralyzed, awake, and only minimally sedated. 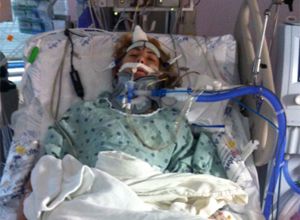 Drew was now totally dependent on the healthcare providers in the back of the ambulance. He was re-intubated by the respiratory therapist and, shortly after, the crew began noticing a sharp decline in oxygen saturations and bradycardia that would rapidly become fatal.

The crew contacted the originating hospital and spoke with an emergency physician who asked them to check the ET tube and re-intubate if necessary because the impending cardiac arrest was most likely respiratory related and not from the head injury.

The ET tube was never checked or re-inserted following the consult with the physician.

The ambulance called to divert to a closer facility when Drew’s oxygen saturation dropped to 40 percent and his heart rate dropped into the 30’s with no palpable pulse. Upon arrival, the staff at the hospital quickly recognized the improper intubation and was able to correct the problem, but the damage was done.

Drew’s family arrived at the trauma center to find that while he was awake and talking three plus hours after the accident, he now had no brain activity. His anoxic brain injury was not a result of the accident, but a result of an improperly placed ET tube when he was re-intubated in the ambulance.

His family knew that something somewhere went wrong, but where? How could this have happened? They remained by his side until his death on June 29, 2013.

'Do it for Drew' Foundation

The 'Do It For Drew' Foundation, started by Drew's family, works with EMS agencies and smaller community hospitals to educate EMS and other healthcare providers. The foundation wants EMS providers and their agencies to have the best equipment and training possible to transport a patient to the closest appropriate facility. If needed, once at the hospital the foundation would like to see dedicated transport teams available for transfer to another facility.

EMS providers have much to learn from this tragic case and preventing a similar event. Some of the learning topics include:

Drew's death is just one case, but we know that it is not the only case where patient harm was the result of multiple points of failure within a system of care. It is often not a single cause, but a multi-layered process where an error or issue could have been stopped, but the process defenses failed, leading to a catastrophic outcome.

Next time you intubate a patient, 'Do It For Drew' and please recheck the tube!

Bradley Dean is the Battalion Chief over the Training Division for Rowan County Emergency Services in Salisbury, N.C. He also serves as the Paramedic Program Director for Rowan-Cabarrus Community College. Dean began his career as a volunteer with the Thomasville (N.C.) Rescue Squad and in 1996 went to work for Davidson County EMS in Lexington, N.C. where he still works part-time. He and several colleagues host the Tuesday EMS Tidbits podcast and Facebook group to share EMS ideas and tips.

David Hughes is the father of Drew Hughes. He and his family run the 'Do It For Drew' foundation promoting patient safety in healthcare. Hughes was a former N.C. Highway Patrolman who served his community in a variety of public safety initiatives. Hughes also formerly worked as a Systems Analyst for the local hospital where the family lives.

This article was originally posted Feb. 16, 2016. It has been updated.