How we sabotage ourselves in EMS

How do you live with yourself after killing a man?

I tell myself that second guessing comes with the territory, and that I did what I could, but sometimes all we can do isn't enough

I know that I killed him.

For years I've made excuses, avoided thinking about it, rationalized and lied to myself, but I'm as certain that I killed him as I am that the sun will rise tomorrow. For me anyway.

He was an addict, and not a very nice one. More often than not, he would lash out at his rescuers after coming out of his heroin-induced, near-death experience after we administered naloxone. Maybe he wanted to die. Maybe his penchant for taking his high to the limit was his way of ending his existence without actually having to conjure the courage needed to pull the plug. Maybe he just wanted to get as high as he could. I'll never know. Nobody will.

I do know that just because a person is an addict doesn't mean that they can't have a heart attack. As a matter of fact, I know this now, and knew it just as well then. Cardiac arrest is a byproduct of an overdose, just as surely as respiratory arrest is. But did I treat him for cardiac arrest? No, I put on my blinders, put on the show for the people who had assembled, stuck him with the Narcan and waited.

After a minute it became evident that something wasn't right.

I should have felt for a pulse, but I didn't. I saw the same unconscious person that I had revived a dozen times and did what I did the previous times; administer the miracle drug and watch him come back from the brink. Only this time, he didn't. His eyelids never fluttered, his breathing rate never increased, and he never sat up, looked around and started complaining that we ruined his high. The fact that he was 60-years-old never entered my mind. He was an addict, plain and simple, and he overdosed. I treated him accordingly, or rather, according to my unfounded beliefs.

He was pulseless, not breathing and just about dead, and I could have saved him. Rapid defibrillation would have been great, if the defibrillator wasn‘t three floors below me, and out in the street, safely tucked away where we keep the stuff that any self-respecting EMT carries with them on every emergency call. An IV would have been great too, but I left the kit in the truck too, along with all the cardiac medications.

So he died, right there on the floor of his apartment. Yeah, we did CPR, and eventually carried him out of the house and got him to the ER, but I know without a doubt that I could have started his heart and given him another chance, if I had brought the needed equipment along.

I have a way of compartmentalizing things that I find uncomfortable. I have little drawers in my brain, with sturdy locks that give me the ability to keep those drawers closed. But even the best lock can be picked, and my relentless mental attack on the things that I simply cannot forget no matter how deeply buried wears down the best defenses. So here I am, some 10 years later, wondering how many other people I killed. 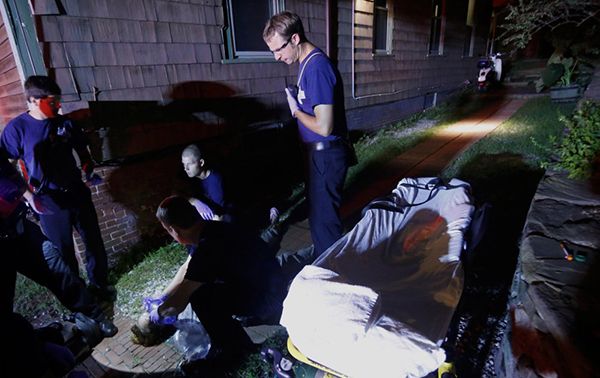 There was the kid hit by a car while I was in the shower and another ambulance from further away responded. And the 50-year-old guy who had a heart attack while fixing a fence whose veins I simply couldn't find. And I stayed on scene far longer than prudent, and not because I desperately wanted to save his life; rather I desperately didn't want to bring a cardiac arrest victim into the ER without IV access. Or the guy who reportedly seized while in custody; he remained in his cell, dying from an overdose when the condom full of cocaine that he had stuffed into his rectum broke. And I nonchalantly strolled through the police station to get him.

I tell myself that all of this second guessing comes with the territory, and that I did what I could, but sometimes all we can do isn't enough. But therein lies the problem. This is EMS, it isn't baseball. Batting 300 doesn't cut it. Batting 400 won't get you into the Hall of Fame. Batting 999 doesn't either. We have to bat 1000, or people die. And that is a difficult stat to live with, especially years later, when your time is done, and there isn't any shot at redemption. Those people died on my watch, and there isn't a damn thing I can do about it. I can't "get 'em next time," or try harder. I had my shot, and I failed.

And now I have to live with it.