St. Charles County, Missouri, like thousands of other communities across the nation, is facing a serious health epidemic: heroin and prescription opioid overdose.

Drivers traveling across the newly-completed Stan Musial bridge between Illinois and Missouri are treated to a picturesque view of the St. Louis skyline, highlighted by the Gateway Arch — a 630-foot monument commemorating the city's role as settlers pioneered westward. But those drivers don't see the dramatic increase in heroin and opioid overdose call volume for St. Charles County Ambulance District paramedics.

How to start an EMS naloxone distribution program

Guilford County EMS partners with the N.C. Harm Reduction Coalition to distribute naloxone to patients who refuse transport after an overdose.

SCCAD, which covers all municipalities and unincorporated areas of the county, is 25 miles from the Arch, an icon of westward expansion. The 592 square miles service area has a population of nearly 400,000 and a rich history of its own. Nestled along the Missouri River, the city of St. Charles served as Missouri's first state Capitol, and as the final embarkation point of Lewis and Clark's expedition.

St. Charles county boasts the highest median household income in the state, unemployment is well below the national average and several municipalities have made Money magazine's annual "Best Places to Live" list. Despite all these positives, opioid abuse has steadily increased.

"If we go back just under a decade to 2008, our volume for these types of calls was under 200 per year," said paramedic Lisa Cassidy, the driving force behind SCCAD's #StopHeroin initiative. "It grew steadily over the next six years, spiked 40 percent in 2015, and last year increased further to 425."

Cassidy and several colleagues began talking in 2016 about how the district may be able to inform residents just how serious the issue had become. What began as an idea to wear special shirts with the message #StopHeroin has evolved into a robust, multi-pronged effort aimed not only at awareness, but intervention for those struggling with addiction.

First on the agenda for Cassidy was engaging with the county's anti-heroin task force, CRUSH — Community Resources United to Stop Heroin. The group, comprised of representatives from school districts, treatment providers and the prosecuting attorney's office, among others, was thankful to have paramedic representation, as they recognized that these individuals were the ones on the front line of the epidemic.

Concurrently, the district worked to develop a series of infographics that were used individually on social media, and compiled onto a single page in the Summer 2016 edition of "Pulse Points," SCCAD's quarterly newsletter. 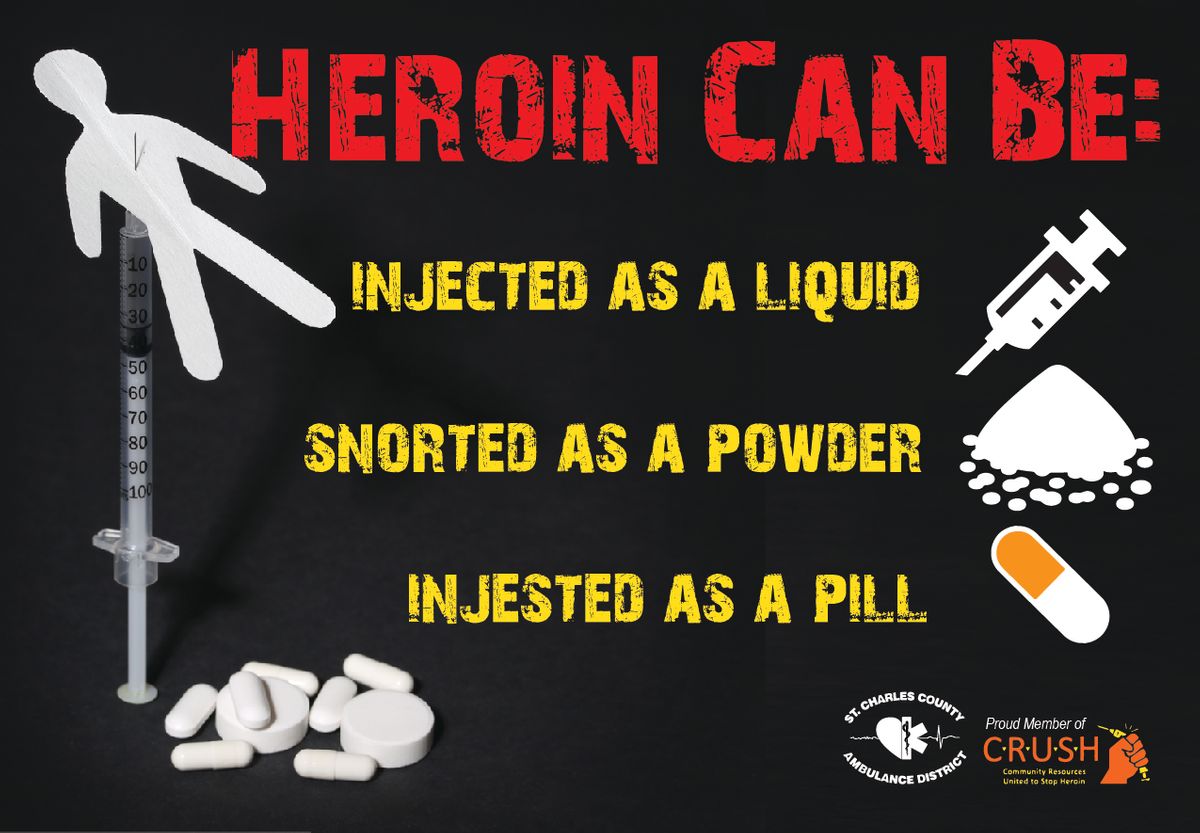 The simplistic imagery utilized caught the attention of the CRUSH group, who opted to utilize the material for their handouts, and even on a billboard along Interstate 70. 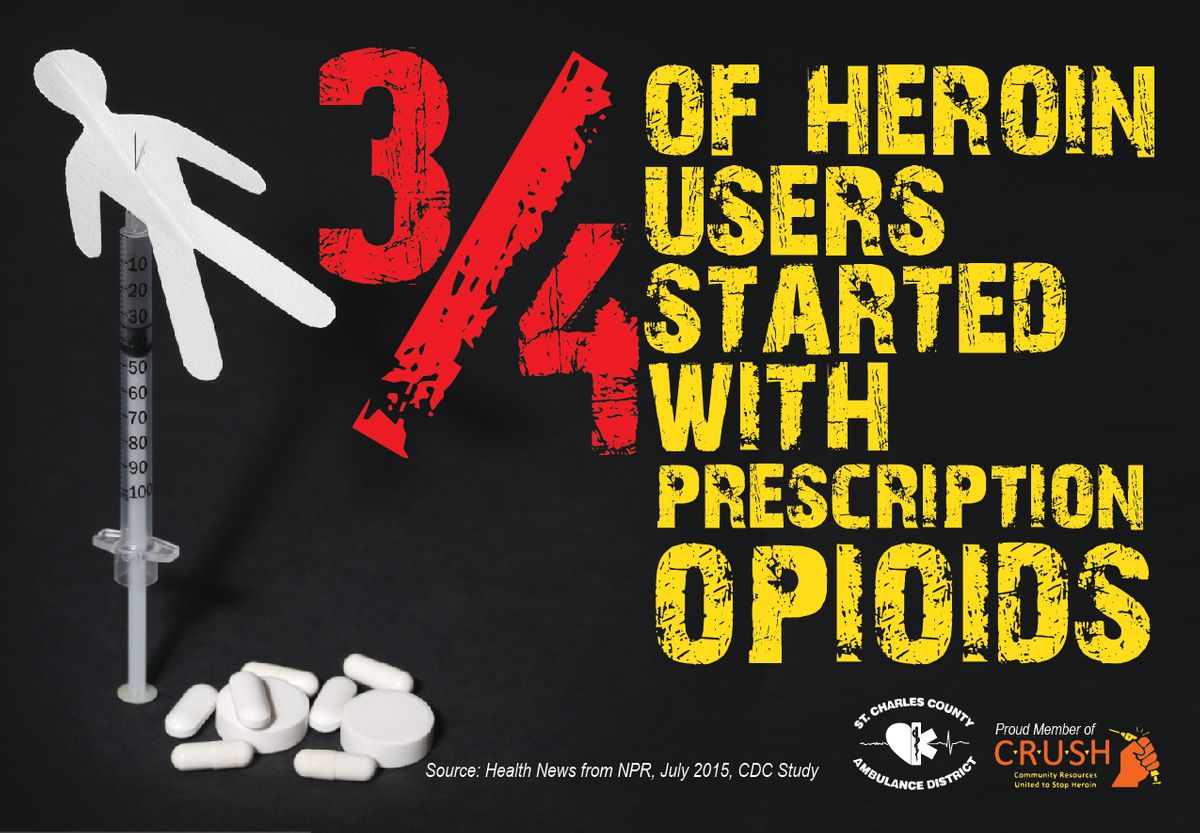 CRUSH's flagship project is the county's annual Teen Drug Summit — a gathering of approximately 500 sixth, seventh and eighth grade students each November. Students selected represent every public school district in the county, as well as many parochial schools.

Cassidy pitched the idea of showing the students a raw, firsthand look at an overdose call. Some were initially apprehensive, but ultimately, the group decided that this would be a powerful takeaway for the students present; one that would get them talking with their friends back at school.

Cassidy solicited the assistance of Adam Hermann, a SCCAD paramedic and video producer, who shot and produced a video that opens with audio of an actual 911 call, then transitions to a re-enactment of paramedics administering naloxone and attempting to revive the patient; all while his mother and brother look on.

The video is part of a larger presentation developed for the Teen Drug Summit. Other topics covered include opioids' physiological effects on the body, why individuals make the leap from pills to heroin and video interviews with paramedics, law enforcement and parents discussing the emotional toll that these calls take on all involved.

The presentation drew strong reviews from students, teachers and parents present at the Summit; with many inquiring if SCCAD would be willing to present the material at their school, civic organization or church group.

Willing was an understatement for Cassidy, who since November of last year, has made over a dozen #StopHeroin presentations, reaching over 1,000 individuals. SCCAD leverages established relationships with Chambers of Commerce, Rotary Clubs, Kiwanis and other community organizations for additional opportunities to get in front of audiences with this material. Organizations interested in scheduling a presentation for their group need to simply contact the ambulance district; no minimum number of attendees is required.

For EMS providers, heroin and opioid overdose calls can be extremely frustrating. Unappreciative patients, complicated bystander dynamics and a host of other less-than-ideal variables may present themselves on calls of this nature. Often, patients do not want to go to the hospital, leaving paramedics in the difficult position of obtaining a refusal from someone whom they know may use again. Regardless of whether those successfully resuscitated agree to go to the emergency department, they are rarely linked with treatment resources in their community.

With this in mind, Cassidy and Dave Lewis, SCCAD Assistant Chief, set out to develop a system of follow-up for patients revived by SCCAD. The pair worked closely to secure agreements with in-patient and out-patient treatment partners Preferred Family Healthcare, Center Pointe Hospital, Crider Center and Bridgeway Counseling. Each of these agencies specialize in different areas of treatment and several have agreed to guarantee beds to SCCAD-referred patients, regardless of individuals' ability to pay. St. Louis-based National Council on Alcoholism and Drug Abuse has also lent invaluable insight into the development of the follow-up from the Substance Use Recovery Response Team.

At the time of an overdose call, paramedics always recommend that the patient go to the emergency department for further observation and treatment. If the patient refuses, he/she will be offered an intramuscular dose of naloxone as a precautionary measure. All opioid overdose patients, regardless of whether they agree to transport or the second dose of naloxone, will be provided a packet of treatment resources available to them.

Included in the packet is a release form, authorizing the attending paramedic to share the patient's information with Cassidy or the district's other mobile integrated health paramedics. If the individual agrees, a specially-trained MIH paramedic will arrange a follow-up appointment in 24 to 48 hours to discuss treatment options in more detail. Also included on the release form are spaces for the patient to authorize SCCAD to speak with family members; the goal being that they would have a supportive individual present at the time of treatment discussion.

Substance Use Recovery Response Team launched in early 2017. SCCAD, along with their mental health partners, are optimistic about the future of the program. Several patients have already entered treatment programs and one women used the information packet to enter a treatment program before paramedics were able to return for a follow-up appointment. The team is hopeful that it will, in time, reduce instances of heroin and opioid overdose in the county.

"Will every patient agree to seek treatment? Of course not," Cassidy states candidly. "But continuing to obtain refusals will do nothing, but keep us on the path we've been on. This is an epidemic on which we need to work collaboratively if we want to see meaningful change."

With the Substance Use Recovery Response Team getting off the ground and requests for #StopHeroin presentations coming in regularly, SCCAD is cautiously optimistic about the future.

"We're proud of the cohesive program we've put together over the past year, but ultimately, time will tell if these efforts lead to reduction in responses for prescription opioid and heroin overdoses," said Chief Taz Meyer. "Perhaps the most encouraging sign at this point is the fact that now more than ever, our community is more willing to admit that there is an issue and is willing to discuss it. We still have more work to do, but even as recently as a year ago, that open dialogue simply was not present in St. Charles County."

About the author
Kyle Gaines serves as Director of Community Relations for SCCAD, and has served with the District since 2008. In his role, Gaines plans, develops and executes of the District's community safety programs. In addition, he leads marketing efforts for SCCAD, including newsletters, social media and presentations for community groups on a wide variety of topics.