‘Normalization of deviance’: Chief Gary Ludwig on the death of Tyre Nichols

Super Bowl showtime: How Glendale fire crews are preparing for the big game

3 ways providers can use ChatGPT on the job

Lack of compassion was the crime

‘Remember what you witnessed’: Memphis is a wake-up call for emergency services

First-of-its-kind research of medics in the U.S. fire service reveals troubling rates of obesity, binge drinking and smokeless tobacco use

Paramedics play a critical role in our nation’s emergency and disaster response system and are charged with protecting the lives of the citizens in the communities they serve. Paramedics have a physically and mentally demanding job, must respond to emergencies on a moment’s notice, and often face dangerous and challenging work conditions including risks for injury, assaults by patients and others on scene and exposures to diseases and toxins.

A substantial number of paramedics (estimates range from 25-35 percent) work in the U.S. fire service where it is well known that the majority of calls involve responding to medical emergencies and only about 4 percent of calls are for fires [1]. However, little is known about how occupational demands impact their physical and behavioral health.

The data reported are from the baseline assessments of two FEMA-sponsored longitudinal cohort studies [2,3].

Women were excluded from analysis due to their low representation (<5 percent) in the U.S. fire service and the resulting inability to conduct gender-based analysis [4]. In order to focus on firefighter-paramedic career job positions, the 212 male firefighter-paramedics who had complete anthropometric data at baseline from the initial 1,480 were included in this study. Read more about the methods and measures used in both studies [5].

This study is one of the first to examine general and behavioral health status in a national sample of firefighter-paramedics. Key findings included that:

1. The prevalence of overweight and obesity combined was shockingly high (84.6 percent), and higher than that in the U.S. population.

The prevalence of overweight and obesity combined (BMI ≥25.0 kg/m2) in this sample was consistent with data for firefighters in general [6], but is concerning because it confers greater risk of morbidity and mortality, low fitness, and injury [2, 6]. Because the majority of paramedics work outside of the fire service in private EMS companies or separate public (e.g. municipal or county) EMS organizations, it is likely that the problem of overweight and obesity is at least the same and perhaps is even worse because most firefighter-paramedics had to at least undergo physical agility testing at entry and a minority of departments require periodic incumbent fitness testing [2]. However, there are no consistent fitness requirements for paramedics or EMTs working outside the fire service. 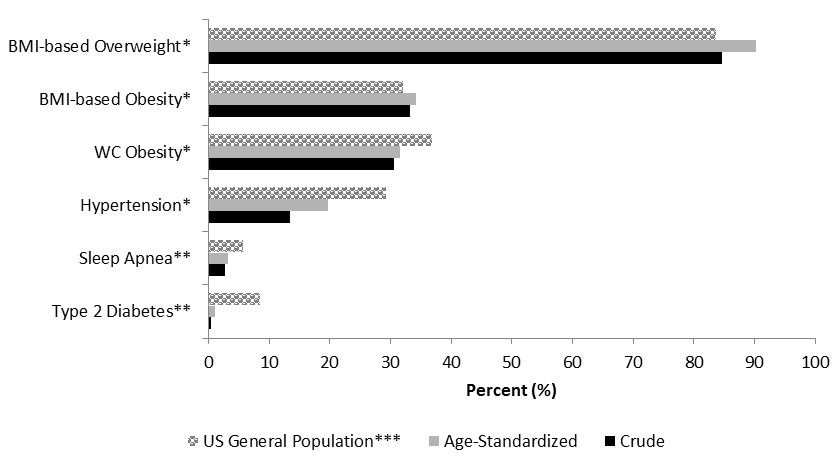 Prevalence for general health conditions among firefighter-paramedics compared to males in the general U.S. population.

2. Firefighter-paramedics reported high rates of heavy and binge drinking of alcohol and depression relative to the general population.

We also found that heavy and binge alcohol drinking are very common among firefighter-paramedics, raising the concern that a significant percentage may be at risk for alcohol-related problems. Alcohol abuse among paramedics is an issue that has been raised before [7], and deserves more attention and may be related to their high rates of depression relative to males in the general U.S. population [8].

On the other hand, it is possible that the high rates we found are related to the culture of the fire service and may not be the same for paramedics working in EMS settings [9]. More research is needed on alcohol use patterns in this group. 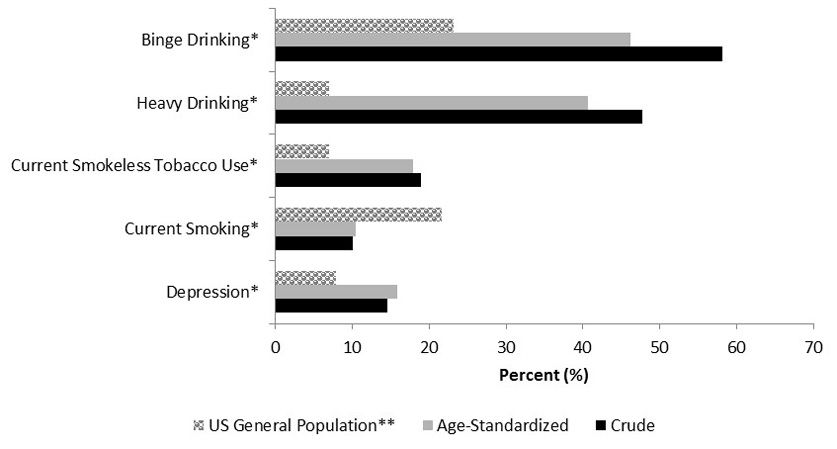 Prevalence for behavioral health conditions among firefighter-paramedics compared to males in the general U.S. population.

3. Prevalence of smokeless tobacco use was high while smoking was low compared to the U.S. general population.

The prevalence of smoking in this sample was low compared to general public, but smokeless tobacco use was very high [10-12], which also may reflect the culture of the fire service [13]. It is unclear if this pattern of tobacco use would be the same among paramedics outside the fire service, so future studies should focus on examining this issue among non-fire service paramedics.

Our data provide the first comprehensive health profile of firefighter-paramedics in the U.S. fire service. It is likely that the job demands of EMS, including the challenges that shift work imparts on eating and exercise behaviors, sleep disruption and related sleep problems, and consistent exposure to trauma play a role in the high rates of problem drinking, depression, and overweight and obesity. However, it is not known how well these data generalize to the majority of paramedics or other EMS personnel working outside the fire service. This group should be a research priority for future health studies of EMS personnel.

Nattinee Jitnarin, Ph.D. is a project director with the Center for Fire, Rescue, and EMS Health Research within the Institute for Biobehavioral Health Research at the National Development and Research Institutes, Inc. Dr. Jitnarin is trained in nutrition, health psychology, qualitative research methods, and epidemiology.

Walker SC Poston, Ph.D., M.P.H. is deputy director of the Institute for Biobehavioral Health Research at the National Development and Research Institutes, Inc. and a senior principal investigator in the Center for Fire, Rescue, and EMS Health Research. Dr. Poston is an occupational epidemiologist whose research focuses on occupational epidemiology and health, firefighter and military health issues, and the etiology, and assessment, and management of obesity and cardiovascular disease. He is a fellow of the American College of Epidemiology, a fellow of The Obesity Society, and a decorated veteran of the U.S. Air Force.

Sara A. Jahnke, Ph.D. is a principal investigator with the Institute for Biobehavioral Health Research at NDRI and the Director of the Center for Fire, Rescue, and EMS Health Research (CFREHS) at IBHR. Dr. Jahnke is trained in the behavioral sciences and is very active in fire service health initiatives. She is an active member of the Safety, Health and Survival section of International Association of Fire Chiefs and is called on regularly to be a consultant on health related topics for that committee and was invited to author a white paper for the 3rd Life Safety Summit of the Everyone Goes Home program from the National Fallen Firefighters Foundation.

Christopher K. Haddock, Ph.D., PStat, is director of the Institute for Biobehavioral Health Research at the National Development and Research Institutes, Inc. and a senior principal investigator in the Center for Fire, Rescue, and EMS Health Research. Dr. Haddock’s research focus in on health issues among “tactical athletes” such as individuals in the military, fire service, and law enforcement. He is a National Strength and Conditioning Association certified personal trainer, a fellow of The Obesity Society, an accredited professional statistician, and full member of the American Statistical Association. Dr. Haddock also is a decorated veteran of the U.S. Air Force.

Helping a department through loss