Some features that we consider abnormal on adult ECGs are completely normal on a child's ECG. And those features vary by the age of the child.

The newborn’s ECG is similar to the ECG of an adult with right ventricular hypertrophy.

The ECG begins to become more reflective of left ventricular dominance as the child ages from infancy to early childhood.

As the child ages and enters adolescence the ECG is more like the adult ECG. Some juvenile patterns may persist.

These are the most common pediatric dysrhythmias.

Types of PSVT common in children:

Congenital heart malformations occur in eight out of every 1,000 live births. They are often discovered during prenatal exams.

Many pediatric cardiac diseases can lead to ECG abnormalities, including:

Obtain a 12-lead ECG on any pediatric patient with one or more of these signs or symptoms.

Because the right ventricle is dominant in infants and toddlers, an additional V4 right should be done. You can do a second ECG or just use the V3 wire and label it as "V4R," skipping V3. The rest of the precordial leads can be placed using the same bony landmarks as for adults.

Limb electrodes should be placed on the limbs, near the shoulders and hips, for less muscle artifact. You can decrease movement artifact in babies if you allow a familiar caregiver to hold them. 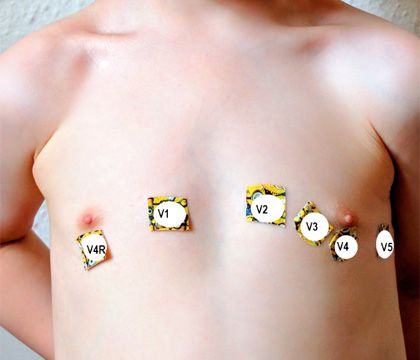 As with adult ECGs, the best way to determine what findings are abnormal is to be familiar with what normal looks like.

Learn more about pediatric ECG acquisition and interpretation from these articles.

Dawn Altman, RN, EMT-P is the administrator/owner of the website ECGGuru.com, a website providing resources for instructors of ECG and cardiac topics; and ECG Guru, Inc., Health Education and Consulting, providing ECG classes for all healthcare professionals, at levels from beginner to advanced.

She is a well-known ECG instructor who specializes in EMS training; as well as an RN with experience in the emergency department, EMS, PACU, home health, and cath lab admit and recovery. She has consulting experience as a legal nurse consultant and book reviewer.

All materials on the ECG Guru are high-quality, free of copyright, and free to download for teaching purposes. Contact Altman at ECGGuru@gmail.com.