5 Tips for developing a healthier you

Worth every minute: 3 daily stress-relief habits

The pathophysiology of stroke with Scott Davis

What do you do after the lift assist?

Increasing the amount of hands-on time in chest compressions improves ROSC, but survival to discharge is uncertain

Medic and Engine 44 respond to a report of an unconscious person at a private residence. As they arrive, one of the firefighters immediately enters the house with no equipment followed closely by a firefighter carrying an automated external defibrillator (AED). The rest of the engine crew and the two paramedics begin unloading the advanced life support equipment.

As the paramedics enter the room, they find the first firefighter performing chest compressions and the second firefighter finishing application of the AED pads.  A third firefighter takes a position at the patient's head and begins to assemble the bag-valve-mask (BVM) and oxygen.

he two paramedics take positions on the opposite sides of the patient at the level of the thighs.  One medic begins prepping the patient's leg for an intraosseous infusion while the other medic prepares the manual monitor/defibrillator.

The voice prompt indicates that no shock is advised and the two firefighters who initially entered the house change roles. The medic disconnects the AED pads and plugs them into the manual machine, which reveals slow but organized pulseless electrically activity (PEA).

After15 minutes of regular epinephrine administration and high-quality and minimally-interrupted CPR, one of the medics detects the presence of a pulse. The patient remains comatose and is intubated and placed on a portable ventilator prior to transport. Upon arrival at the emergency department, the patient continues to maintain a palpable pulse.

Later back at the station, the medics and firefighters discuss the call in an informal debriefing session held at the kitchen table.  One of the firefighters comments that it is great to have pre-assigned roles when entering these types of calls so that he can focus on doing one thing well. The entire group agrees that this orchestrated approach and their teamwork allows for the provision of minimally interrupted chest compressions and contributed to the return of spontaneous circulation (ROSC).

Data for the study came from the ROC Epistry, an epidemiological database of standardized out-of-hospital cardiac arrest information collected from 260 EMS agencies in the United States and Canada. The study covered a 19-month period and included all adult patients who suffered an out-of-hospital cardiac arrest of presumed cardiac etiology and presented with a non-shockable rhythm.

In the overwhelming majority of cases (n = 2074), researchers determined the presence and frequency of chest compressions by using digital code recordings, which measured either changes in the electrical resistance (impedance) across the chest that results from chest compression or through the use of an accelerometer placed between the rescuer and the patient, which measures displacement of the chest wall.

In 29 cases, the research staff hand calculated the presence and frequency of compression using the ECG recordings, which were subsequently confirmed with digital voice recordings made during the resuscitation attempt.

The primary outcome variable was return of spontaneous circulation, defined as the return of a pulse palpable in any vessel for any length of time. The research team used multivariable linear-regression analysis to estimate the effect of a 10% change in chest compression fraction on ROSC.

During the study period, researchers identified 16,487 patients who suffered cardiac arrest of presumed cardiac etiology and underwent a resuscitation attempt by paramedics. Of those 11,158 had an initial rhythm that did not require a shock, however, only 2332 had chest compression frequency and depth information available for analysis.  Of those, the researchers could not determine outcome data for 51 patients, which left a study sample of 2103 patients.

The mean age of the sample was 67.8 years and the majority (61.2%) was male.  In about 11% of the cases the cardiac arrest occurred in a public place, non-EMS personnel witnessed about one-third (32.9%) of the arrests, and bystanders performed CPR for about one-third (35.4%) of the patients.The majority presented in asystole (64.0%).  About one-fourth (24.2%) achieved ROSC and 2.0% survived to hospital discharge.

On the other hand, increased chest compression fraction resulted in reduced survival to hospital discharge rates. However, only 42 patients survived long enough for discharge from the hospital.

Thus the number of patients in each category was too small to draw any meaningful inferences about survival.  In addition, the researchers designed the trial to examine the effect of increasing chest compression fraction on ROSC rates, not survival to hospital discharge. 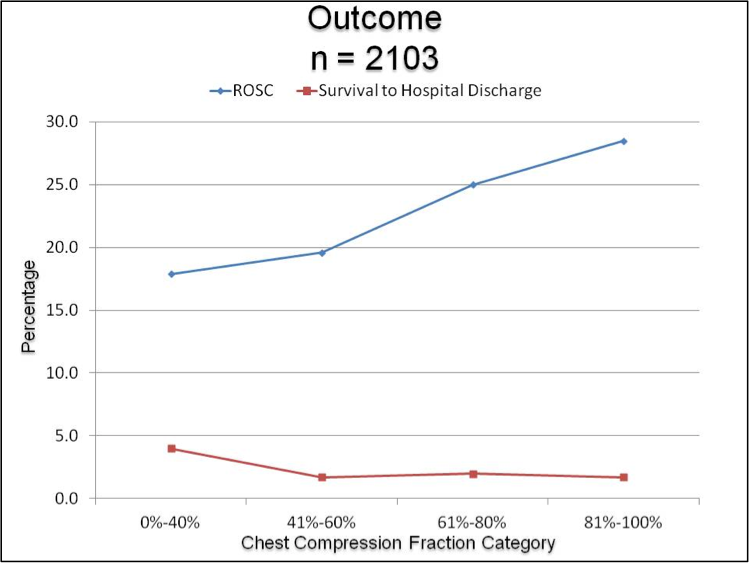 Figure 1. Relation of compression fraction to ROSC and survival to discharge.

An adjusted odds ratio means that the researchers performed the mathematical calculation after holding constant the values of all other measured variables known to impact survival following cardiac arrest. The adjusted odds ratio represents the independent effect of the intervention in question, in this case chest compression fraction.

Table 1 represents the odds ratio results from this study.  Notice in the last column the unadjusted odds ratio for achieving ROSC is 1.11 for every 10% increase in chest compression fraction.  An odds ratio of 1.0 means that an intervention is just as likely to occur as to not occur.  Just underneath the 1.11 are two numbers, 1.05 and 1.18.

These two numbers represent the 95% confidence interval. The confidence interval means that if you repeated the experiment using a similar sample of patients and similarly trained EMS personnel, you could be 95% confident that the new odds ratio for that outcome would lie between 1.05 and 1.18. Since both numbers are greater than one, the likelihood of achieving ROSC is slightly better for every 10% increase in chest compression fraction.

Unfortunately, the improved odds do not continue when the researchers adjusted for other factors known to impact survival following out-of-hospital cardiac arrest.  After adjustment, the odds ratio falls slightly to 1.05. Although this value is still above 1.0, the lower number in the confidence interval is below 1.0, meaning that we cannot be confident that the true odds ratio is above 1.0.

What This Means for You

The two most important interventions for improving the outcome of patients who suffer an out-of-hospital cardiac arrest are timely defibrillation and the administration of high-quality chest compressions (Neumar et al., 2010).

An observational study using data from the Resuscitation Outcomes Consortium demonstrated that chest compression fraction was an independent predictor of survival-to-hospital discharge for patients who suffer an out-of-hospital cardiac arrest and present with either ventricular fibrillation or pulseless ventricular tachycardia (Christenson et al., 2009).

This data demonstrates a positive linear relationship between the two study variables, suggesting that EMS agencies who improve their average chest compression fraction should see improvements in ROSC rates from patients who present in non-shockable rhythms.

The authors could not continue to demonstrate the existence of that relationship once the chest compression fraction rose above 0.8.  Fractions that high represent intense physical activity by the rescuers, which the authors speculate may be triggering an earlier onset of fatigue. Alternatively, the higher fraction may indicate rescuer willingness to delay or omit other life-saving resuscitation interventions in favor of uninterrupted chest compressions.

Researchers designed this investigation as an observational study, which means they made no attempt to control other variables that may have influenced resuscitation outcomes. Observational studies are useful for establishing an association between an event and an outcome but one should never attempt to conclude that one causes the other.

Almost 60% of the sample population came from two ROC sites.  Consequently, these results may more accurately represent what happens in those two systems than what happens in EMS in general. In addition, the researchers had to exclude about 82% of all the cases because the EMS agencies that responded to those cases were not capable of objectively monitoring CPR quality.

However, the researchers did analyze the excluded cases separately and found ROSC rates to be significantly lower than in the study group. Reduced ROSC rates for the patients that did not have CPR quality measurements may indicate that simply monitoring performance within an EMS system improves outcome measurements.

When compared to the excluded patients, more of the study patients had bystander CPR and received a defibrillation attempt.  Since both of these factors are predictors of ROSC and survival (Abrams, Moyer, & Dyer, 2011; Sladjana, 2011), this could have altered the results making chest compression fraction appear more important than it really is.

On the other hand, advanced care paramedics were first on the scene less often for the study population and this group had less epinephrine use, which could have could have reduced the intervention effects.

The final limitation relates to the issue of statistical power. A power calculation uses a mathematical formula to generate data relating to the ability to detect an intervention's effect, if there really is an effect. One of the factors need for the power calculation is sample size.  The more cases included in the analysis, the easier it is to detect an effect.

A statistician would say that the study was sufficiently powered to detect the effect or the change.  The reason that the researchers chose ROSC as the endpoint of the study is because using survival-to-hospital discharge would have required more than 12,000 cases just to detect a 1% difference in outcome.  Trying to reach this goal could have added an additional eight to ten years to the study. Even so, this study was not sufficiently powered to continue to detect a different is ROSC rates when the researchers adjusted the odds ratio to control for other variables known to influence outcome.

These findings, along with others suggest that EMS agencies must find way to improve the quality of the CPR they provide if an increase in ROSC rates (and potentially survival) are the goals. Part of that improvement means minimizing the hands-off periods that are common during out-of-hospital resuscitation attempt.

Riegelman, R. K. (2005). Studying a study and testing a test: How to read the medical evidence. Philadelphia, PA: Lippincott, Williams, and Wilkins.

The author has no financial interest, arrangement, or direct affiliation with any corporation that has a direct interest in the subject matter of this presentation, including manufacturer(s) of any products or provider(s) of services mentioned.

'I will never forget this one'

Why auscultation matters in EMS