Public health; we’ve got your back

Proactively expanding the EMT and paramedic scope of practice

How EMS leaders can combat a toxic work culture

Relationships by objectives: Bridging the gap

Wolff-Parkinson-White Syndrome, or WPW, is one of the pre-excitation syndromes caused by an accessory pathway, or bypass tract, between the atria and ventricles. The normal AV node acts like a guard gate, slowing down the impulse before it enters the ventricles.

The accessory pathway in WPW, called the Bundle of Kent, can be on the right or left side of the heart. The Bundle of Kent can combine with the normal pathway through the AV node and form a circuit, giving rise to reentrant tachycardias.

Consistently following a process to analyze a patient's ECG will help you correctly identify their cardiac rhythm.

History of WPW
Wolff-Parkinson-White Syndrome was first described in 1930 by Louis Wolff, John Parkinson and Paul Dudley White. They reported a series of young patients who experienced paroxysms of supraventricular tachycardia and had characteristic ECG changes.

Now, WPW Syndrome is defined by the presence of a congenital bypass tract combined with episodes of tachyarrhythmia. WPW is associated with a small risk of sudden cardiac death which occurs in approximately 1 to 3 per thousand people. Patients may experience the first signs of WPW Syndrome any time from infancy to early middle age.

Preexcitation on the ECG
When an impulse travels forward along the Bundle of Kent into the ventricles, it arrives slightly before the impulse that travels through the slower AV node. The ECG sign of this preexcitation of the ventricles in WPW is called a delta wave. 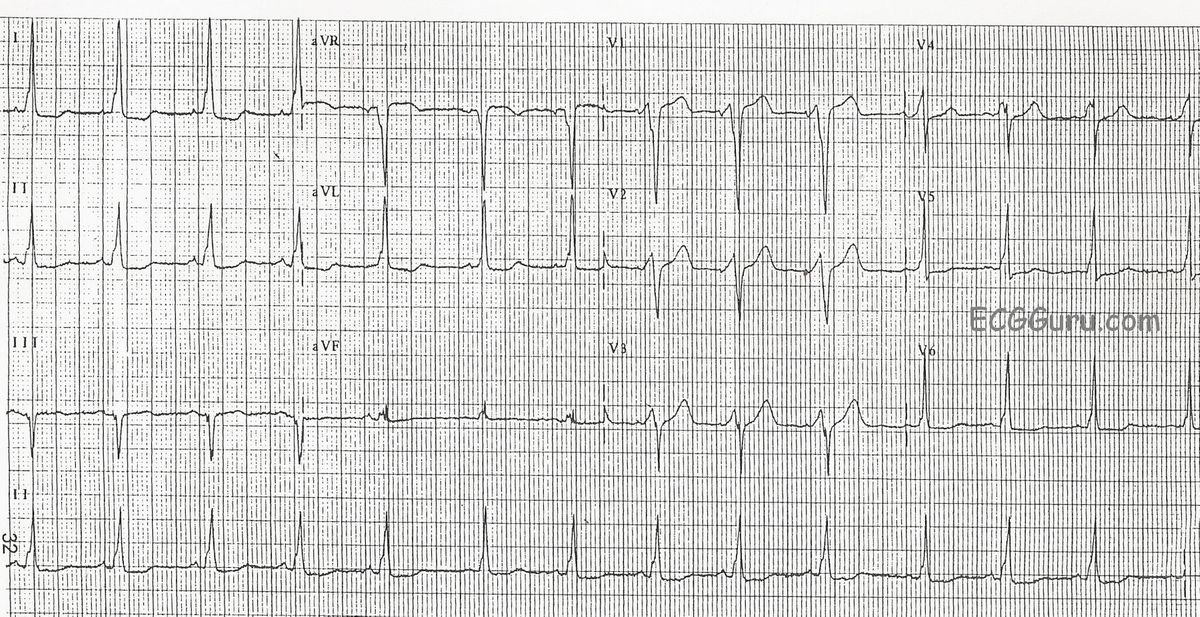 WPW also causes discordant ST and T wave changes, with the ST and T in the opposite direction of the QRS complex. On the ECG, the discordant ST segments appear abnormally flat and slightly elevated or depressed. 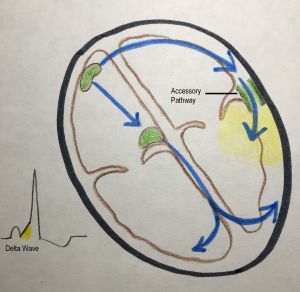 WPW Syndrome and tachyarrhythmias
People with WPW are prone to bouts of supraventricular tachycardia, called AV reentry tachycardia (AVRT). When a circular pathway forms between the normal AV pathways and the accessory pathway, it causes one impulse to depolarize the ventricles and return to the atria in a rapidly repeating cycle. This is called reentry. AVRT often begins with a premature atrial or ventricular contraction. 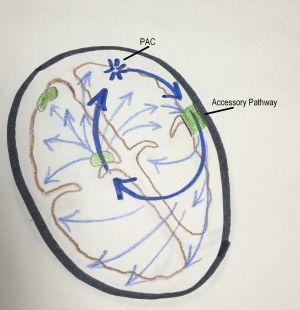 WPW clinical signs and symptoms
Patients experiencing WPW Syndrome may present with new-onset PSVT, recurrent PSVT, or signs of congestive heart failure. Symptoms are not usually present during periods of normal rate. During tachydysrhythmias symptoms will depend on the age of the patient. Infants often present with tachypnea, feeding problems, and irritability. Verbal children, teens and adults may complain of "pounding chest," rapid heart rate, shortness of breath and exercise intolerance.

Prehospital treatment of AVRT
Orthodromic AVRT should be treated using your PSVT protocols. Valsalva maneuvers, adenosine and calcium-channel blockers are used in the stable patient, while synchronized DC cardioversion is recommended for the unstable patient.

Antidromic AVRT may be mistaken for ventricular tachycardia. Wide-complex tachycardias should always be treated as VT until proven to be supraventricular. The VT protocols that include amiodarone or procainamide for stable patients and DC cardioversion for unstable patients will usually serve the preexcited AVRT patient well.

A real danger
Tachyarrhythmias can also form when impulses from atrial flutter or atrial fibrillation rapidly enter the ventricles through the accessory pathway without the filtering effect of the AV node. The extremely rapid rates produced in these situations can quickly lead to deterioration and ventricular fibrillation. Atrial fibrillation occurs in up to 20 percent of patients with WPW. ECG signs of preexcited atrial fibrillation include:

Treatment of preexcited atrial fibrillation
If the patient is hemodynamically unstable (likely), urgent synchronized DC cardioversion is needed. Avoid AV nodal blocking drugs like adenosine, Ca-channel blockers, and beta blockers, as they may increase conduction through the accessory pathway, increasing the heart rate.

Long-term treatment
Patients are sometimes managed with drugs to prevent AVNT. A permanent solution for some patients is radiofrequency ablation of the accessory pathway.

What are your thoughts or questions about WPW and the 12-Lead ECG?

Dawn Altman, RN, EMT-P is the administrator/owner of the website ECGGuru.com, a website providing resources for instructors of ECG and cardiac topics; and ECG Guru, Inc., Health Education and Consulting, providing ECG classes for all healthcare professionals, at levels from beginner to advanced.

She is a well-known ECG instructor who specializes in EMS training; as well as an RN with experience in the emergency department, EMS, PACU, home health, and cath lab admit and recovery. She has consulting experience as a legal nurse consultant and book reviewer.

All materials on the ECG Guru are high-quality, free of copyright, and free to download for teaching purposes. Contact Altman at ECGGuru@gmail.com.

How to document and report misconduct

Ind. EMS urges those with chronic conditions not to put off calling 911