Chikungunya, a mosquito-borne virus that has historically been prevalent in Africa and Asia, is making its way to the U.S.

A question posted in Quora asks “What’s a more dangerous infectious disease threat than Ebola? Read the response from virologist, immunologist and biologist Ian York, and add your own thoughts to the comments.

There are already a number of good answers here -- rabies, malaria, dengue, and HIV should be in any list.  But if you're asking about diseases that people in the United States should genuinely be worried about, Chikungunya should be right up there.

Chik is a mosquito-borne virus that has historically been prevalent in Africa and Asia. But a couple of years ago, it spread to the Caribbean, and over the past year it has absolutely exploded there.

Ebola: What does EMS need to know?

And it's inevitably spreading into the United States. The mosquitos that carry Chik survive in the Southern states, and the virus has already had local spread in Florida (see the table here: Chikungunya virus). The big problem with Chik is that some strains seem to be efficiently spread not only by Aedes aegyptimosquitos, but also by  Aedes albopictus, which is more abundant and widespread in the USA than aegypti (because it outcompetes aegypti). If you live in the southern USA, in 2015, or maybe 2016, you are going to hear about Chikungunya in your area. 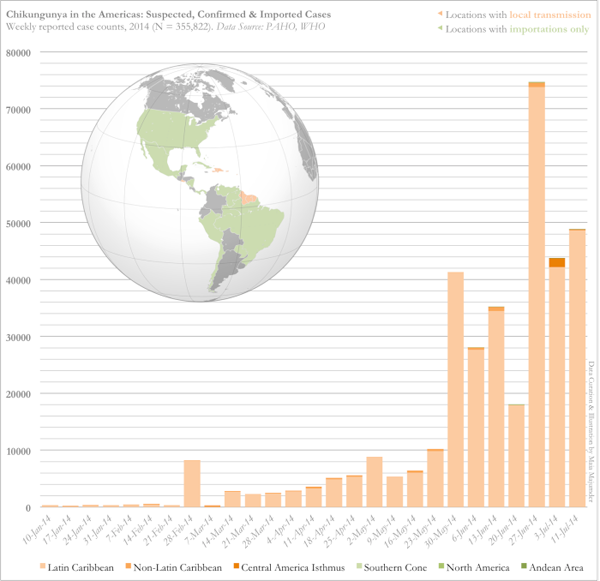 (Image Chikungunya in the Americas: Charts)

Chik isn't fatal, as a rule, but it's an awful, awful disease. Its name means "that which bends up," referring to the contortions its sufferers go through, and that tells you what you need to know. Terrible joint pain, headaches, awful fever -- you are completely knocked out by this, certainly for days, usually for a couple of weeks, sometimes for years.

There's no treatment, there's no vaccine yet, and it's coming for you and your children in the next year or two.

Personally, I'm much more worried about Chikungunya than I am about Ebola.

The EMS1 Community Q&A section features EMTs and paramedics answering questions from "Why don't paramedics run to patients?", to "What medic habits can't you shake?" From the lighthearted, to the clinical, we've asked and you've answered.

Have a question you'd like to ask the EMS1 audience? Email us at editor@ems1.com.