The First Choice of First Responders

Everyone in EMS needs to know something about from where we came. We also need to know where we are and how we got here. In order to speak knowledgeably about EMS, you must read the documents that have the described the landscape, provided the maps, and determined the destinations for EMS as we know it today.

You cannot be an effective change agent if you don't know these things. This is a little history lesson. Let's start at the beginning with two documents that laid the foundation for EMS in America.

One response to these facts was the development of the first EMT curriculum. The reason why the "home" of EMS has been the U.S. Department of Transportation and National Highway Traffic Safety Administration was an unforeseen consequence of the funding for that early curriculum development.

Dr. Francis (Frank) Pantridge created a Mobile Coronary Care Unit and portable defibrillators in Belfast, Ireland. He published a paper in 1967 entitled: "A mobile intensive care unit in the management of myocardial infarction" (Lancet 2:271, 1967), in which he describes the use of a portable defibrillator and out-of-hospital treatment of heart attacks to reduce morbidity and death. This second seminal EMS document marked the beginning of prehospital ALS.

All prehospital practitioners should read "Accidental Death and Disability: The Neglected Disease of Modern Society" as well as Pantridge's articles.

NHTSA published "Emergency Medical Services Agenda for the Future" in August of 1996. It has been the foundation for the development of EMS in the United States since its publication. The "Emergency Medical Services Agenda for the Future Implementation Guide" followed in 1998. This pair of documents laid out a series of recommendations, objectives and suggestions as to how to achieve the vision for EMS in America.

In 2000, NHTSA published "Emergency Medical Services Education Agenda for the Future: A Systems Approach (Education Agenda)," a document that might be considered even more influential as we have been following the pathway it described since NHTSA released it. The Education Agenda laid out a structure made up of five components:

The first three components are complete, with national certification and program accreditation on the horizon. The education agenda has set 2010 as its endpoint. To understand what's going on in EMS, we all need to read the education agenda.

One component the EMS agenda identified was the need to advance EMS research to support evidence-based practice. In 2004, NHTSA released the EMS Research Agenda. The document described the history and current status of EMS research, identified impediments to the growth of scientific investigation, suggested strategies for improving the quality and quantity of EMS research to provide a scientific foundation for care, and sought support for elevating the science of EMS and prehospital care to the next level. The research agenda made eight recommendations. Read the research agenda to find out what those recommendations were and to see if we are following them. Are we making any progress in EMS research?

NHTSA has released the first three of the five components articulated in the EMS education agenda. The "National EMS Core Content" came out in May 2005, the EMS National Scope of Practice Model came out in 2006, and the National EMS Education Standards came out in 2009. The final two components of national certification and national paramedic program accreditation are forthcoming.

In 2006, the Institute of Medicine of the National Academies published a series of three reports: Hospital Based Emergency Care: At the Breaking Point, Emergency Medical Services at the Crossroads, and Emergency Care for Children: Growing Pains. Emergency Medical Services at the Crossroads is arguably one of the most important EMS documents in recent history. The report says that government leadership at the federal, state and local levels is fragmented and inconsistent. It also says that the current EMS delivery system suffers in six key areas:

After the introduction, the second chapter of the report begins with "The Brief History of EMS" and "The Troubled State of EMS," critical reading for those who want to understand our history and present state. The report continues in chapters three through seven to discuss issues, and makes a series of recommendations at the end of each chapter.

All of these documents include material that will help each of us understand the history of EMS — our history. These two quotes from sum it up:

"History is a guide to navigation in perilous times. History is who we are and why we are the way we are." — David C. McCullough

"Those who cannot learn from history are doomed to repeat it." — George Santayana 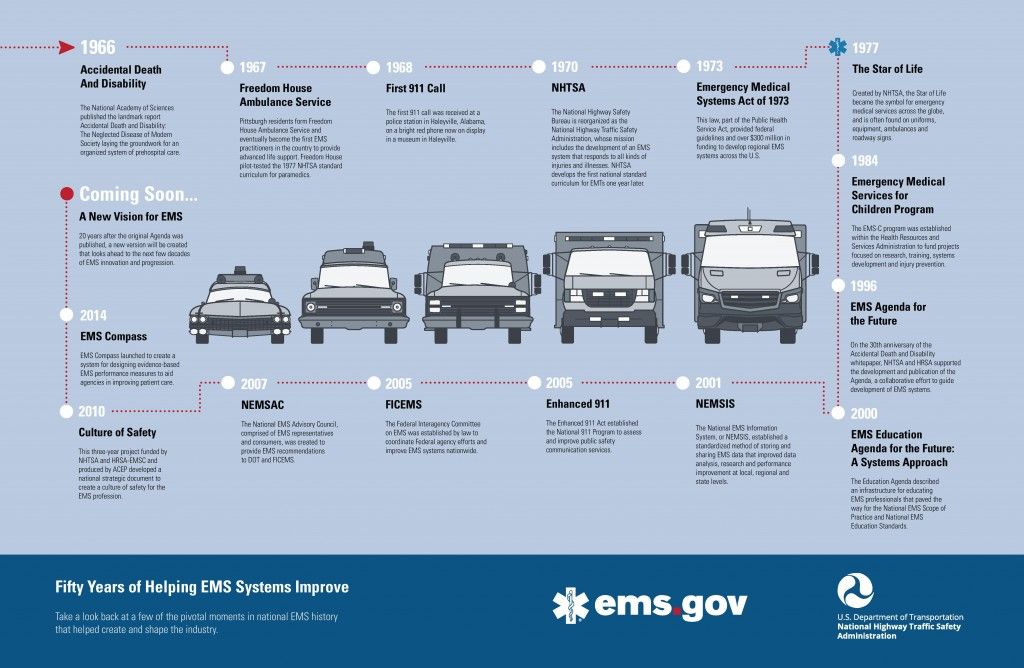 Mike Touchstone is the fire/paramedic services chief in charge of EMS training at the Philadelphia Fire Academy and director of the Philadelphia Fire Department EMS Training Institute. One of his primary responsibilities is overseeing EMS instructor development. Mike has over 25 years experience in EMS and over 10 years as an instructor. He is also a contract instructor at the National Fire Academy and is a regular presenter at state and regional EMS conferences. Mike received his bachelor’s degree in Health Sciences; EMS Management from George Washington University. To contact him, email mike.touchstone@ems1.com.

More articles from this author