How to buy body-worn cameras (eBook)

Should EMS be a COVID-19 vaccine priority?

Roundtable: What will a COVID-19 vaccine mean for EMS?

The word of the week is vaccine

5 gifts for providers and patients

The only house left standing: How a FF-EMT's house became a 'light on the hill' after a devastating tornado

5 reasons to do your rig checks

Inside EMS Podcast: How to develop a culture of mentorship in EMS

Why paramedics need to learn how to talk

Talking … it's such a simple thing. A basic function of the human body. In literal terms, EMS providers are actually quite good at it. As a matter of fact, it's often rare to find us in a true moment of silence.

But I'm not writing this article to discuss the physical act of flapping our jaws. I'm talking about actual talking. You know, about important things … like our feelings.

Yes, believe it or not, we paramedics actually do have feelings.

As much as we enjoy running our mouths, we are actually a very guarded group of people. We have been trained to see and do things that most people couldn‘t dream of all while keeping our “game faces” on. We tend to lie to ourselves and we actually believe that the stress of this job doesn't bother us.

Over the last three decades, we have created this culture that buys into the idea that showing emotion somehow equates to weakness. Here‘s the thing: Whether we want to admit it or not, we are human and we have human emotions. We can lock them up as securely as we wish, but they don't go away. We can‘t kill them. We can only hide them. We ALL do this, and for what? To save face?

I can remember spending an entire year losing sleep over a call where I attempted to terminate resuscitation only to have my order denied and the patient regaining pulses later and then completely recovering. I felt absolutely horrible. I strongly considered leaving EMS over it. When I finally spoke to a counselor about it, he pointed out some rather obvious facts that almost immediately changed my outlook on the whole situation. Had I just talked to someone about it, instead of hiding my emotions, I could have saved an entire year of emotional distress. Had I not had the sense to finally talk to a counselor, I could have lost my career and who knows what after that. 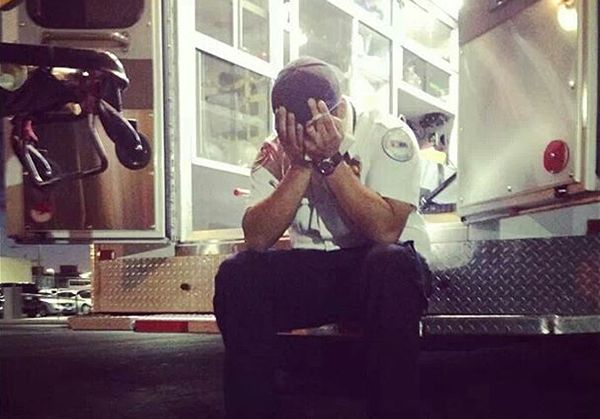 Fast forward nearly a decade and I found myself in what I believe is the most stressful call of my career. I made a very controversial decision and performed a procedure that I hope to never do again in my lifetime. I very quickly recognized that this call was going to bother me. So you know what I did? I took a shift off, spoke to the medical director and was honest when my friends asked how I was doing. Five days later, I was back on shift and doing just fine. Had I run this call eight years prior, it would have eventually ended my career.

EMS is a team sport, but we aren't competing against each other. When you‘re worried about appearing “weak” or “unfit for this job,” ask yourself how you would react if one of your coworkers came to you to talk about the very thing that‘s bothering you. Remember that we all struggle and it takes true strength to admit when you need help.

I don't need to spend time explaining the things about this job that get to us. What I need to stress is the importance of recognizing the effects of a stressful scenario and learning how to address them. Take advantage of CISM programs and never underestimate the power of an honest conversation over some beer and nachos. I personally enjoy a weekly counseling session as it's literally an hour of my week where I can be completely selfish and just talk about whatever I want. Fortunately, this is something that's easily affordable through my insurance, but if it's not feasible for you, then try setting up a regular meeting place with some of your peers or friends. Get into the habit of just talking about what's on your mind. It could save your career and potentially your life.

As I've mentioned before, the stresses of public safety can be extremely difficult and if not addressed, can lead to severe depression. I would highly recommend checking out the Code Green Campaign. They are a non-profit group of first responders that talk about this very thing. They provide some really great stories and tons of resources if you are in need of help.

Just remember, there is no job on this planet that will change the fact that you are human. Don‘t be afraid to act like one.

I’d rather listen to your troubles than your eulogy

One of the hardest parts of this job: The call after