The power of self-care and empathy

TXA: The future for stop the bleed?

EMS 2050: Only those who know how to adapt will survive

Freedom of speech: Social media and the public sector

Is EMS a career field or a stepping stone?

EMS by the numbers: Where we need to go next

Quick take: How to create online media policies for providers

But there’s a big difference between a handful of people gathered together and gossiping, and the 1.4 billion people on Facebook with the potential to see gossip posted with the click of a button.

That’s the premise of the presentation given by Curt Varone, retired assistant chief of the Providence (RI) Fire Department at Fire-Rescue Med in Henderson, Nev.

In many cases fire and EMS providers who share inappropriate information online don’t try to disguise themselves because at the time they don’t realize they’re doing anything wrong.

"Not one of those guys did what they did to maliciously hurt anyone," he said.

If anything they were simply oblivious as to what is appropriate to post online, and this must be managed by setting reasonable boundaries and educating crew members on department policies. Although responders are usually not thinking of it in this way, they must also be aware of the public perception that they are glamorizing their role in someone else’s tragedy.

Key takeaways on social media for fire and EMS professionals 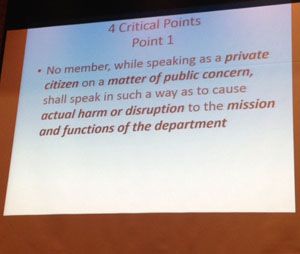 IAFC president to demonstrators: ‘We do not judge. We act.’