5 Tips for developing a healthier you

Worth every minute: 3 daily stress-relief habits

The pathophysiology of stroke with Scott Davis

What do you do after the lift assist?

Understand the findings of the amiodarone vs. lidocaine vs. plain saline (ALPS) trial and what those findings mean for EMS providers

Rescue 46 and Engine 13 respond to an unconscious person at a high school football game. Dispatch reports an off-duty firefighter on the scene performing CPR.

Upon arrival, Engine 13 confirms the absence of a pulse and takes over CPR using a metronome to assist in maintaining the appropriate rate. After application of the AED pads, the device recommends a shock, which firefighters deliver immediately. The engine crew resumes high-quality CPR at a 30:2 compression/ventilation ratio.

Rescue 46 arrives and plugs the AED pads into the manual defibrillator, which displays ventricular fibrillation. Paramedic Davis delivers the second shock on time and the crew begins the next two-minute period of CPR.

Paramedic Davis asks the paramedic intern to establish an IV, which she easily does. After securing the IV, the intern administers epinephrine. While waiting for the next rhythm check, the intern asks if she should get the amiodarone ready. Davis quickly explains this particular EMS agency does not administer antiarrhythmics during a resuscitation attempt.

During the next six minutes, the patient receives two additional shocks and one additional milligram of epinephrine. At the next rhythm check, the patient has organized complexes and a palpable pulse. The patient remains comatose, does not breathe on his own and has a blood pressure of 104/72 mmHg.

During transport, the patient has another episode of ventricular fibrillation and the medics resume CPR. On arrival in the emergency department, the patient remains in cardiac arrest. The ED staff provides a thirty-minute resuscitation attempt. Without any response, the ED physician terminates the attempt.

Back at the station, the intern asks why the agency does not use an antiarrhythmic during a resuscitation attempt. She explains her school taught her to give amiodarone, which helps improve survival rates. Davis explains the local medical director removed the amiodarone from the ambulances last year stating there was no evidence it was effective.

Study review
Researchers with the Resuscitation Outcomes Consortium conducted a placebo-controlled investigation of antiarrhythmic administration for patients who suffered an out-of-hospital (OOH) cardiac arrest [1]. Although not the official name, the investigation was known as the Amiodarone vs. Lidocaine vs. Plain Saline (ALPS) Trial.

The primary purpose of the ALPS investigation was to determine if amiodarone or a plain saline placebo resulted in greater survival to hospital discharge regardless of the neurological status of the patient — primary outcome variable, although the researchers collected data on a number of other outcome variables. The secondary purpose of the investigation was to compare lidocaine to a placebo and compare amiodarone to lidocaine. This hierarchy of comparisons highlights where the researchers expected to find the greatest differences in outcome measures [2].

Although this investigation utilized the same formulation of lidocaine used in resuscitation for decades, the type of amiodarone used was new. The standard formulation of amiodarone used in many early studies contained two chemicals that helped keep the drug dissolved in the liquid [3]. Both of these chemicals are independently known to reduce the force of myocardial contraction and produce hypotension [4-6]. These effects may be responsible for the lack of long-term survival seen in earlier trials of the drug [2].

The study drugs were packed in sealed boxes that paramedics would open after determining patient eligibility. Each ambulance had one kit, which was carried to the scene along with all other resuscitation equipment.

Each kit had three identical glass syringes marked with labels that read 1A, 1B, or 2. The contents of the three syringes in each kit were identical; each syringe contained 150 mg of amiodarone, 60 mg of lidocaine, or plain saline. 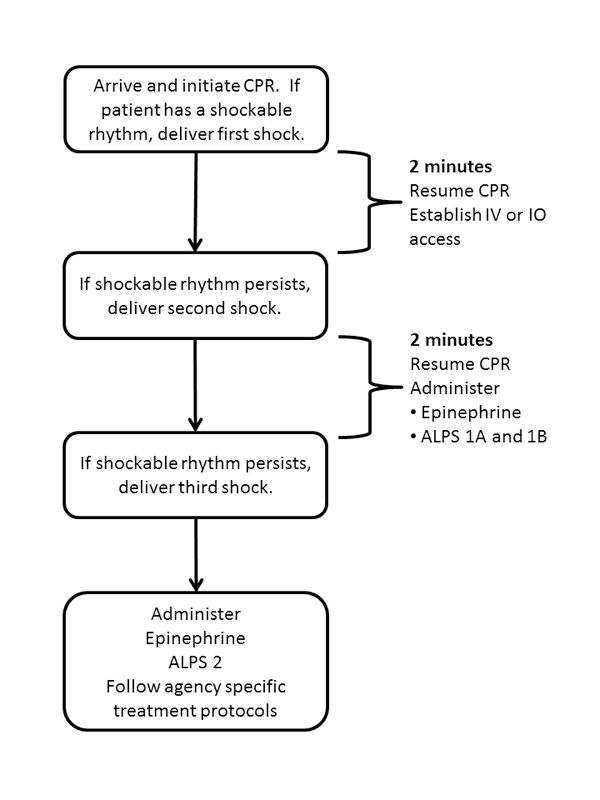 Paramedics, research staff and hospital staff were unaware of the contents of each individual kit — double blinded. If the patient received the contents of all three syringes, the total dose of drugs administered during the resuscitation attempt was 450 mg of amiodarone or 180 mg of lidocaine.

Patients received CPR according to the 2010 AHA Guideline recommendations [7]. During this trial, the ROC was also conducting a comparison study on the effectiveness of continuous chest compressions versus interrupted chest compressions that followed the traditional 30:2 compression/ventilation ratio.

CPR quality measures were closely monitored and strictly enforced during the study period. For continued participation in the study, EMS personnel in each participating agency had to meet certain CPR quality measures related to rate, depth, and chest compression fraction. In addition, the agencies had to meet other quality benchmarks such as completeness of patient care records, submission of ECG reports and timeliness of interventions.

After beginning chest compressions and providing bag mask ventilation, paramedics performed advanced life support interventions according to local protocol. In some cases, the first defibrillation attempt occurred before arrival of ALS personnel. In other cases, ALS personnel delivered the first shock immediately upon identifying a shockable rhythm (analyze early) or after delivering two minutes of high quality CPR (analyze later). During the two-minute period after the first shock, paramedics attempted to gain intravenous access, either through a peripheral venous or intraosseous site but did not administer any medications. 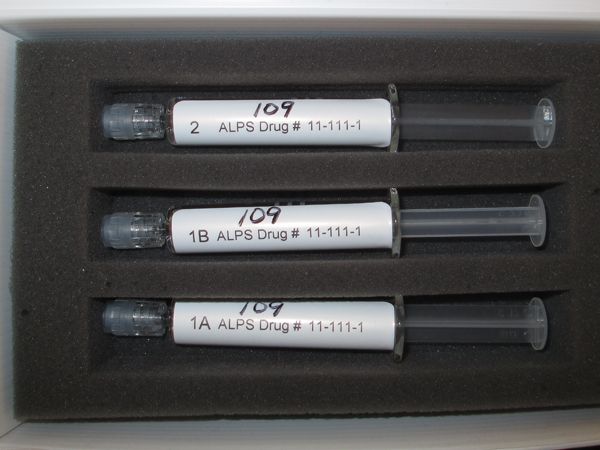 Patients who did not require subsequent shocks beyond the first defibrillation were not eligible for inclusion in this study. Among other eligibility criteria, the adult patient had to receive at least two shocks in the field.

If the patient remained in a shockable rhythm after two additional minutes of high-quality CPR, the crew delivered a third shock. After resuming CPR, the paramedic delivered a second dose of epinephrine and the contents of the ALPS syringe with the label 2 regardless of the weight of the patient. All subsequent care followed agency specific protocols and may have included additional epinephrine, vasopressin, sodium bicarbonate, beta-blockers, procainamide or magnesium.

The study protocol is summarized in Figure 1.

Results of the ALPS trial
During the roughly 41-month trial, 35,889 patients in the areas served by the participating agencies had a non-traumatic out-of-hospital cardiac arrest. Of those, 7,051 had ventricular fibrillation or pulseless ventricular tachycardia at some point during the resuscitation attempt. After excluding a variety of patients who did not fully meet the inclusion criteria, data from roughly 3,026 patients underwent primary analysis.

Factors known to influence survival from OOH cardiac arrest were balanced over the three groups. This included factors such as whether the arrest occurred in a public place, whether the collapse was witnessed, whether bystanders performed CPR or delivered the first shock with an AED. The time it took for BLS and ALS responders to arrive on the scene were not different between the three groups.

As often happens in clinical trials, the researchers and statisticians looked at treatment effects among various subgroups. This analysis provided some very interesting results. For example, if bystanders witnessed the cardiac arrest, survival to hospital discharge rates were about five percent higher if the patient received either amiodarone or lidocaine when compared to placebo.  Additionally, if EMS personnel witnessed the collapse, survival was about 20 percent higher in patients who received amiodarone instead of placebo. 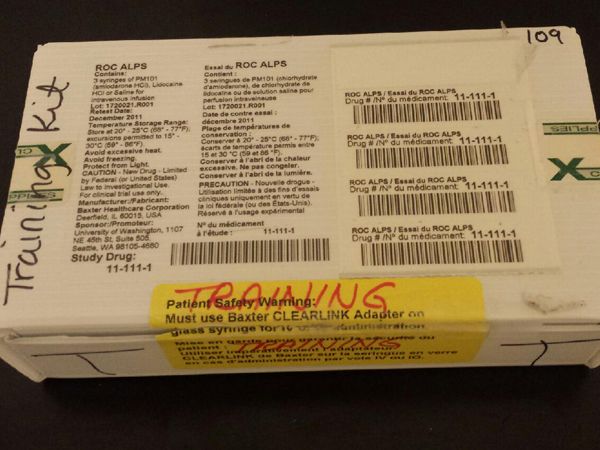 What the ALPS trial means for EMS providers
For patients with refractory ventricular fibrillation or pulseless ventricular tachycardia, two previously conducted randomized control trials failed to find improved long-term survival rates associated with the intra-arrest administration of either amiodarone or lidocaine. In the ARREST trial, researchers found that amiodarone administration in the OOH environment was associated with improved return of spontaneous circulation rates when compared to a placebo, but was not associated with improved survival to hospital discharge [8].

Researchers in the ALIVE Trial found similar results in a comparison of amiodarone to lidocaine [9]. The results of the ALPS Trial support the findings of both earlier trials.

The latest American Heart Association guidelines, released before publication of the ALPS Trial, note that recommendations for the use of antiarrhythmic medication in the treatment of cardiac arrest are based primarily on short-term survival benefits, not long-term survival benefits [10].

Study limitations
Before changing treatment protocols and guidelines, one must carefully consider other factors that may have influenced the outcome of the study. One variable the researchers could not control is the care provided after the paramedics delivered the patient to the hospital. Some might argue this factor alone could be responsible for why the drugs, especially amiodarone, seemed to work well in the field but did not translate into increased long-term survival.

Although possible, this seems unlikely in this investigation. Hospital personnel were blinded to the experimental groups — meaning they did not know who received the lidocaine, who received the amiodarone, or who received a placebo. This helped prevent hospital staff from treating one group differently than the others.

The research staff also measured several aspects of the hospital care, such as whether patients received targeted temperature management, coronary catheterization within 24 hours of admission, an implanted cardiovascular defibrillator or withdrawn or limited care. With respect to these variables, there were no differences between the groups.

In this trial, it took paramedics, on average, about 19 minutes from the moment they arrived on the scene until they administered the study drugs. In two other randomized control trials, the drugs were not given until 21 and 25 minutes after ALS arrival on scene [8,9]. One might argue the reason the drugs do not appear effective is they are given too late in the resuscitation attempt. Historically, a vasopressor is always the first medication administered during a resuscitation attempt. No one knows whether earlier administration of an antiarrhythmic would result in a different outcome.

Based on the results of two earlier trials [8,9], the ALPS researchers believed the administration of amiodarone would result in about a 6 percent increase in survival to hospital discharge. Using those numbers to perform a power analysis, the researchers determined they would need to enroll about 3,000 patients in the ALPS Trial to prove the survival increase really does exist (1000 people per group).

Since the actual survival to hospital discharge rate was only about three percent, the ALPS Trial was not sufficiently powered to demonstrate improved survival resulting from amiodarone. It could be that amiodarone actually is beneficial in increasing long-term survival rates, but this investigation would need about three times as many patients before being able to prove so.

Summary
Although there is no evidence of harm, the routine administration of antiarrhythmic medication during a resuscitation attempt appears unnecessary. A subgroup of patients whose arrest episode is witnessed may derive a benefit from the drugs, however that benefit is still unproven. EMS agencies should continue to focus on training and providing high-quality CPR and early defibrillation.

'I will never forget this one'

Why auscultation matters in EMS