How a 12-Lead EKG can narrow reduced LOC diagnosis

Use the AEIOU TIPS mnemonic, along with 12-lead EKG interpretation, to identify possible causes of reduced level of consciousness

A 41-year-old female went to bed with a headache. In the morning she is minimally responsive. You assess a Glasgow Coma Scale of 9 based on spontaneous eye opening, withdrawal to pain, and no verbal response. She also has neck rigidity.

These are the learning objectives for this EKG Club case:

Broad and deep T wave inversions are often seen in patients who present with acute subarachnoid hemorrhage. Many ideas have been postulated to explain this phenomenon.

At quick glance, one must first recognize that this is an obtunded patient. The cause of the altered LOC could be potentially caused by one or several etiologies. One quick mnemonic to help recall common causes of altered LOC is to recite AEIOU TIPS:

A review of the history that was provided by the husband as well as the physical exam performed in the field, including finger-stick blood glucose, quickly eliminates several of the possible factors in the AEIOU TIPS mnemonic.

The remaining areas of potential concern for this patient’s altered LOC is: Alcohol, Epilepsy, Overdose, Infection and Stroke.

Further questioning of the husband and a cursory search may help to eliminate the potential for alcohol and overdose as causes as well. This then leaves the field provider with concerns for Infection (meningitis, encephalitis) and Stroke.

The neck rigidity found when moving the patient can be seen in both meningitis cases as well as subarachnoid hemorrhage from irritation of the meninges which are the layers of tissue that surround the brain and spinal cord. The husband had stated that the patient had complained of a headache the night before. This could reflect early meningitis or may have been related to an initial small subarachnoid hemorrhage, often called a sentinel bleed. About 40 to 50 percent of patients with an aneurysmal subarachnoid hemorrhage have this sentinel bleed, or warning bleed, days to weeks prior to the second more massive SAH. This may have resulted in the occurrence of a headache the night before. 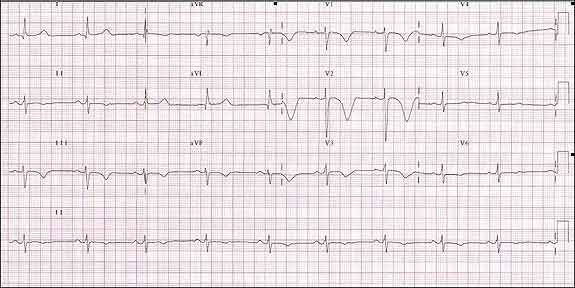 The cause of this broad and deep precordial T-wave inversion is thought to be secondary to an intense catecholamine surge that occurs with the SAH. These circulating catecholamines are thought to affect the coronary microcirculation causing decreased flow and a change in the EKG.

Atraumatic SAH is most often caused by a ruptured aneurysm (80 percent). Most of these are saccular or berry aneurysms located in the Circle of Willis at the base of the brain. These aneurysms typically form at bifurcations of cerebral vessels. About 50 percent of ruptures occur at rest, while the remainder occurs with lifting, orgasm or brawling. The provider may wish to discreetly ask the husband if he and his wife had engaged in sexual activity the night before.

Treatment includes maintaining airway, breathing and circulation. Many patients have elevated blood pressure. However, aggressive lowering of blood pressure should be discouraged until imaging studies have been performed to determine if the stroke is due to ischemia or hemorrhage.

A severly dramatic lowering of blood pressure in acute ischemic stroke can worsen the outcome. Blood glucose levels should be obtained. Hypo- and hyperglycemia should be treated.

Outcome from strokes are worse when blood sugar is not well controlled. Transport should be undertaken safely and promptly to a facility preferably with neurosurgical capability or with the ability to perform interventional radiology. Definitive treatment of an aneurysmal SAH involves either surgical clipping of the aneurysm by a neurosurgeon or placing coils into the aneurysm under angiographic guidance.

Photo of the Week: Mobile stroke unit presented to crew