An out-of-the-box strategy to increase compensation

Highlights:
Introduction
The review
What this means for you

Introduction
Medic 34 responds to a report of a motor vehicle collision on the outer loop of freeway near the city limits. Firefighters on scene report one patient involved in a high-speed rollover. When the ambulance arrives, the firefighters are in the final stages of placing the patient in spinal motion restriction gear.

The initial assessment reveals a male, approximate age 20, thrown from the vehicle. The patient is unconscious but groans when the medic applies a painful stimulus to the nail bed. The airway is patent, the patient has non-labored respirations, and peripheral pulses are present. The rapid head-to-toe examination reveals a hematoma to the left temporal region. The fire officer asks the medic if she wants an EMS helicopter for transport. Since it is late night, she rationalizes that she can transport the patient just as quickly by ground over the fifteen miles to the trauma center.

'Golden Hour,' CPR and the evolution of EMS

At no point during the period up to surgical intervention is time related to outcome, says study

Due to the lack of respiratory distress, the medic places the patient on nasal cannula oxygen to maintain a pulse oximetry value of 94%. On the way to the hospital the medic establishes an IV with normal saline at a to keep open (TKO) rate. The patient’s vital signs remain stable throughout transport and she delivers the patient to a waiting trauma team.

At the end of the shift, another medic in the crew lounge asks why she did not transport the patient by helicopter since the rollover occurred on the outer freeway loop. The transporting medic explains that she did not feel she needed a helicopter and that she was able to manage adequately the patient in the back of the ambulance. The other medic counters with an assertion that all medics must respect the Golden Hour concept. Since every minute counts, he believes she would have served the patient better by providing more rapid transport to the hospital.

Review
For a number of years, the Resuscitation Outcomes Consortium (ROC) has collected demographic, clinical, and outcome data on trauma patients from multiple sites across the United States and Canada. All of this data exists within a single database, known as the ROC Epistry-Trauma. ROC researchers used this database to examine what effect prehospital intervals have on in hospital mortality among trauma patients at risk of adverse outcome.

The study involved 146 urban, suburban, rural, and frontier EMS agencies (air and ground) in the United States and Canada (Newgard et al., 2009). The researchers examined all cases that met the inclusion criteria starting December 1, 2005 and ending March 31, 2007. The inclusion criteria for this study were

1) Patients 15 years of age or older;
2) Blunt, penetrating, or burn mechanism with one or more of the following:

The ROC investigators excluded trauma patients that EMS did not transport, children under the age of 15 years, and patients enrolled in another trauma-related trial involving hypertonic resuscitation.

The researchers used a multivariable logistic regression model to examine the effects of these time intervals on morality.

Regression analysis allows researchers to study the relationship that several independent variables have on a single outcome measure (StatSoft, Inc., n.d.). In this study, each time interval represents an independent variable. The outcome in this study was whether the patient died after arriving but before discharge from the hospital. By performing a regression analysis, the researchers could create a mathematical formula for determining which interval, if any had the greatest effect on in-hospital mortality.

Although the primary outcome measure was in-hospital mortality, the investigators collected additional variables relating to the out-of-hospital environment in order to conduct secondary association analyses, including:

During the 16-month study period, medics in the various EMS systems enrolled 7555 patients (Figure 2). Medics did not transport 3279 of those to a level I or level II trauma center, leaving 4276 patients as candidates for the study. The researchers excluded an additional 620 patients because of the presence of one or more exclusionary factors resulting in an analysis group of 3656 patients. In-hospital mortality for those patients was 22% (806 patients). 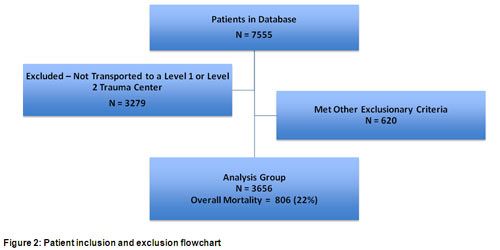 Subgroup analysis in traumatized adults transported to any level hospital when outcome data was available could demonstrate no association between any time interval and mortality (data not reported) or total EMS time and mortality (OR 1.00 per minute; 95% CI 0.99 to 1.00). Subgroup analysis of the 460 children with available outcome date transported to a level-1 or level-2 trauma center could not demonstrate any association between any of the time intervals and mortality (data not reported).

The authors concluded that, based on the results of this study there was insufficient evidence to support the concept that traumatized patients with field-based physiologic abnormality have improved survival with shorter out-of-hospital time intervals. In multiple subgroup analyses, the authors also failed to demonstrate any association between mortality and any other measured variable, including training level of the first responding EMS provider, the method used for transport, demographic variable, or severity of physiologic abnormality.

What this means for you
The Golden Hour is a concept in which both in-hospital and prehospital personnel have faith. The concept holds that traumatized patients receiving definitive care during this first sixty minutes following injury have improved survival over those who do not (Creel, 2008). Much of the infrastructure currently supporting emergency medical services (EMS) and indeed, trauma response systems originated with this concept.

To support the Golden Hour concept, EMS has embraced prehospital practices such as "scoop-and-run" and helicopter scene responses in an effort the reduce the time interval that trauma patients spend in the out-of-hospital environment. Suppose the magical first hour after an injury was merely an illusion. Suppose two-hour out-of-hospital intervals produced the same outcomes. Think of the changes that EMS systems could make in the response system with no increased risk to the patient.

Some have faith in the Golden Hour because they have witnessed cases of trauma victim survival after quick transport to the trauma center. However, one can never be sure that the patient survived BECAUSE of or IN SPITE of our actions, or that our actions had little at all to do with survival.

This article does not provide the definitive answer as to whether or not the Golden Hour exists. Despite the fact that the researchers could not demonstrate support for the Golden Hour, the authors themselves note that most patients in this study had total out-of-hospital time intervals below 60 minutes. Other studies suggest that severely injured patients who spend more than twenty minutes on the scene (Sampalis, Lavoie, Salas, Nikolis, & Williams, 1994) or one hour in the field have worse outcomes (Sampalis, Lavoie, Williams, Mulder, & Kalina, 1993). Researchers in Philadelphia found that severely injured patients suffering from penetrating wounds transported by police with no medical care had outcomes that were similar to those transported by EMS, suggesting that the total out-of-hospital interval may affect survival to a greater extent than field procedures (Band, Pryor, Gajeski, Dickinson, Cummings, & Carr, (2011). The Swiss, on the other hand demonstrated no significant improvement in 30-day mortality on trauma patients with shorter out-of-hospital times even with the arrival time was 35 minutes sooner (Osterwalder, 2002).

Although this paper represents very important research concerning prehospital trauma care, it does suffer from several limitations. Regardless of how meticulous investigators are, observational investigations involving trauma have unmeasured variables that can influence outcome. These variables include patient acuity (the seriousness of injury) and overall health status of the patient. Measures like injury severity scores or trauma scores attempt to control for patient acuity but they are not sensitive enough to capture any associated effects caused by the patients underlying medical conditions (Pracht, Tepas, Celso, Langland-Orban, & Flint, 2007).

Without ethical constraints, researchers would design this type of study by prospectively (before the event) randomizing all the trauma patients into two groups, for example, one with an EMS interval of less than 60 minutes and one with an EMS interval greater than 60 minutes. In this type of design, the medic would rapidly transport some trauma patients (based on randomization) but delay transport for others (again based on randomization). We can all see the concerns there.

The investigators correctly or incorrectly presumed that most paramedics make some rapid transport decisions based on their perception or gut feeling about which patients have injuries that are more critical. For whatever reason, if a paramedic thinks a patient has critical injuries, the medic might initiate transport sooner than if he or she believed the patient was not as severely injured. If shorter EMS intervals actually do decrease mortality, selecting more severely injured patients (with an increased chance of death) for the short EMS interval could underestimate or obscure that benefit.

However, if the instrumental variable is weak, it introduces a source of error into the analysis that weakens the results. In this study, if distance does not correlate well with the EMS interval, it would not support the conclusion of the more commonly used regression analysis method.

In the end, the instrumental variable analysis was strong in only one subgroup of patients in the United States. This means that this form of secondary analysis failed to add support to the primary analysis and that a source or error could play a role in why there was no observable difference in mortality. In the single subgroup with a strong correlation between distance the EMS interval, the results were not different than was provided by the regression analysis, which supports the investigator’s conclusions.

Another limitation is in the time interval measurement itself. All prehospital trauma emergencies involve a period between when the injury occurred and when someone calls 911. The authors reasonably assume that this was a short interval, theorizing that most injuries occur in a public place in full view of bystanders. Another time interval not considered in this study is the interval from when the patient arrives at the hospital until he or she receives definitive care. Since the Golden Hour concept ends when the patient receives definitive care, one cannot draw any conclusions about the hour without measuring this important interval.

Despite the lack of scientific support for the Golden Hour concept, the public expects a rapid response system for people suffering medical and traumatic injuries. Perhaps the value associated with the current response model is a perceived value rather than a realized one. However, one must balance the benefits of public good will against the costs associated with designing and operating such a system. Certainly, there are financial costs in attempting to insure that every injured person within a response jurisdiction can access state of the art medical care within one hour of the injury. Ambulance crashes are a significant mechanism of injury for prehospital personnel (Becker, Zaloshnja, Levick, Li, & Miller, 2003; Centers for Disease Control, 1993; Kahn, Pirrallo, & Kuhn, 2001) as well as a source of legal liability for EMS agencies (Wang, Fairbanks, Shah, Abo, & Yealy, 2008). In many cases, the costs may outweigh the benefit.

2017 EMS Trend Report: Revealing changes in clinical care, finance and use of technology

2016 EMS Trend Report: The forces shaping the present and future of EMS