Ketamine as an anxiety, depression medication?

Why all EMS providers should be preplanning hospital evacuations

AMR closure: a bellwether of things to come?

Behind the Patient: Street Portraits

Connecting with a child who grows up to be a caregiver

The EMS Week 2015 theme is EMS STRONG. From getting ROSC on a child to belting out the “Frozen” theme song on the way to the hospital, we wanted to know how kids have inspired you to be EMS STRONG. See the finalists and winners of our 2015 essay contest, where readers describe how a pediatric response made them feel like a superhero.

https://www.facebook.com/paramedic?v=app_806190236125020&app_data=referer_override%3DShe is 23 and waiting on the sidewalk; beautiful girl, long dark hair down to her waist, pretty eyes and a giant smile. We look at each other, trying to figure out if we know one another, and if so, how.

“She’s in here,” she says after a moment, and leads us inside. The house on Daboll Street has seen better days; peeling paint, loose railing, some cracks in the foundation, but clean and comfortable. We walk up a narrow, freshly swept stairway to the third floor where “Mami” sits in a kitchen chair looking at us as we approach. “She had dialysis this morning but doesn’t feel good. She’s dizzy and has been throwing up.”

Mami looks terrible. She’s 65-years-old, and tired. Kidney failure is simply awful, the dialysis center is a difficult place to spend three hours a day, three days a week. The young girl has all of her grandmother’s medications ready, and gives a concise history in perfect English.

We get the chair ready, lift Mami into it and carry her down. It’s been a long shift and the stairs seem endless. I’m walking backwards, one step at a time, the walls holding me upright as we descend. I’m thankful for the cleanliness; some walls in the places we go are alive with bugs and other things.

We start some oxygen and attempt an IV, test her blood glucose and run an EKG while her granddaughter watches. She is fascinated by the way we work, and asks a lot of questions. A light goes off in my head.

She grins, I grin, everybody grins - even Mami, but she has no idea why. 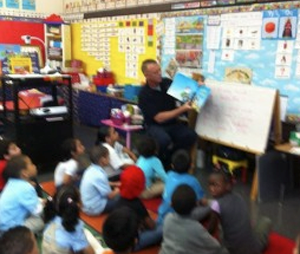 In 1993 I spent six weeks reading Dr. Seuss books to an English as a Second Language (ESL) kindergarten class in one of the toughest schools in the city. It was a program designed to get police and firefighters into the city schools to be role models. I was supposed to follow a set course, starting with The Cat in the Hat, Green Eggs and Ham and some others. I never understood those books when I was little. I still don’t.

I loved those kids, the teachers not so much. It was pandemonium after the first week, once we got comfortable. I wanted to make a good impression so I wore my dress blues to class, and I think I scared them at first, until they got over the fancy suit and realized they had a marshmallow on their hands. I would read a page or two of the good doctor, figured if I thought the stories were stupid, the kids who barely spoke English must hate them too, then let the hour descend into chaos as we told stories and drew pictures and goofed around.

I was not invited back, but I made some great little friends. I would see the kids, about 15 of them, from time to time over the next few years while on calls to their schools or homes, or even on the streets. Every now and then I’d be doing something on a rescue run and some little creep would appear out of nowhere and give me a hug. Of all of the things I’ve done while on the job, that experience proved to be the most rewarding.

Eventually the kids got older, and I stopped seeing them. Time progressed and they grew up and moved, or disappeared. I hadn’t seen any of them in years.

“I still don’t like Dr. Seuss,” Yolanda says as we get out of the rescue and wheel her grandmother into the hospital.

“The Grinch is pretty cool though.”

“I love The Grinch!”

She’s too old to hug now, too much time has passed, but that smile of hers will stay with me forever.

Captain Michael Morse (ret.), mmorsepfd@aol.com, is the bestselling author of Rescuing Providence, Rescue 1 Responding, City Life and Mr. Wilson Makes it Home. Michael has been active in EMS since 1991 and offers his views on a variety of EMS and firefighting topics, focusing mainly on the interaction between patient and provider as a well respected columnist and speaker. Captain Morse is a Johnson/Macoll fellow in literature from the Rhode Island Foundation. Follow Michael on Twitter and Facebook.

What to do if you suspect Munchausen syndrome

Pediatric cardiac arrest: It's on providers to strengthen skills