How to buy FirstNet devices (eBook)

SAN DIEGO — Research presentations, based on the current literature of prehospital trauma care, were a highlight at the National Association of EMS Physicians annual meeting. Here are quick summaries and key takeaways from the papers that were presented involving EMS trauma care.

Bleeding control: tourniquets
Similarly, tourniquet use also received a weak ILCOR recommendation because of the relative weakness of the studies conducted on their use. Many of the studies were conducted in military arenas and not in civilian trauma care.

Military use of chest seals and tourniquets: Lessons for EMS 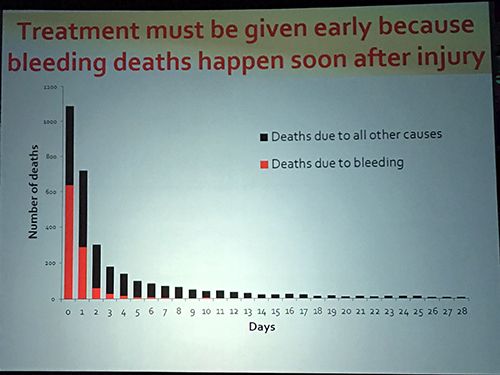 A slide from the National Association of EMS Physicians presentation. (Photo by Arthur Hsieh)

TXA administration for internal hemorrhage
The administration of transexamic acid to patients with traumatic internal bleeding appears to improve survival. In addition, several studies indicate that early TXA use, less than an hour after the initial traumatic insult, produces the greatest positive effect, reducing the patient mortality rate by a third. Conversely, administering TXA more than 3 hours after the traumatic injury was potentially harmful to the patient.

Lessons for EMS at a prolonged, widespread tactical incident

If your EMS agency isn’t innovating, then it’s already behind