JACKSONVILLE, Fla. — EMS leaders attending the Pinnacle EMS Leadership forum were challenged by Jay Fitch, PhD, to face 10 realities – or elephants in the room – of modern EMS. The current paradigm for each challenge was described by Fitch, as well as the opportunities for transformative leadership.

EMS requires a stronger educational base. About one-fourth of EMS providers have a degree. "It is necessary if we are to grow into a meaningful contributor to community health," Fitch said.

What we used to believe, such as response times and all ALS response, needs to be rethought. The things that used to matter may not still matter and we need to rethink what does make a difference to our patients.

Paramedics have an injury rate higher than all other professions. EMS has higher transportation-related fatalities than firefighters or police officers. "We don't want to change our schedule patterns. Departments embracing 48 hour and 72 hour shifts are nuts," Fitch said.

For many EMS agencies the expenses and revenues don't match. To attain fiscal sustainability will take more than offering community paramedicince services.

EMS leaders, too often, don't want to explain what they are doing and why. "Performance measurement is the common language for accountability across all of healthcare," Fitch said.

6. Diversity of caregivers and leaders

The racial, gender and ethnic diversity of EMS providers does not reflect the communities served by EMS. "We need to encourage others by our leadership and replicate successful programs, like the St. Paul EMS Academy, that remove barriers to success," Fitch said. 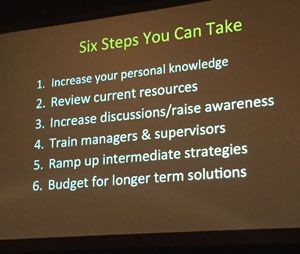 Theft, false certifications and other scams involving EMS leaders seem to be happening much too frequently according to Fitch. "Effective leaders need to focus on consistently doing things right," Fitch said.

There is a lack of succession planning in developing high-quality leaders through mentoring and intentional training. "We need to think about stair-step mentoring programs like the NEMSMA competencies," Fitch said. Succession planning requires understanding agency needs, identifying leaders and developing promising candidates.

EMS workers that grow callous to patient care lead to an outcome of community divisiveness, disdain, and trust. "I believe there will be a Ferguson-like incident in the next 24 months involving EMS," Fitch said. "We need to make abuse of any kind – physical or verbal – against the culture of our patient." Fitch specifically mentioned the Detroit EMT who refused to respond and the Fla. medic that tipped a patient off the stretcher.

"If you are callous, rude, racist, or bigoted and if you don't have the heart of a servant we don't need you," Fitch said.

10. Stress and other ways we eat our young

Fitch highlighted the findings of a survey by Ambulance Service Manager program participants that reported 25 percent of respondents didn't seek help due to concerns about perceptions of others at work. "We are increasingly seeing PTSD, substance abuse, divorce, and suicide in our caregivers," Fitch said. "As leaders we need to be constantly on guard for signs of stress and compassion fatigue."

Fitch, the founding partner and president of Fitch & Associates, closed the presentation by telling attendees that a positive response to change is a choice for EMS leaders and explaining new types of leadership approaches.

Greg Friese, MS, NRP, is the Lexipol Editorial Director, leading the efforts of the editorial team on Police1, FireRescue1, Corrections1 and EMS1. Greg served as the EMS1 editor-in-chief for five years. He has a bachelor's degree from the University of Wisconsin-Madison and a master's degree from the University of Idaho. He is an educator, author, national registry paramedic since 2005, and a long-distance runner. Greg was a 2010 recipient of the EMS 10 Award for innovation. He is also a three-time Jesse H. Neal award winner, the most prestigious award in specialized journalism, and the 2018 Eddie Award winner for best Column/Blog. Connect with Greg on Twitter or LinkedIn and submit an article idea or ask questions with this form.