EMS Artwork: Pain and anguish of a motor vehicle collision 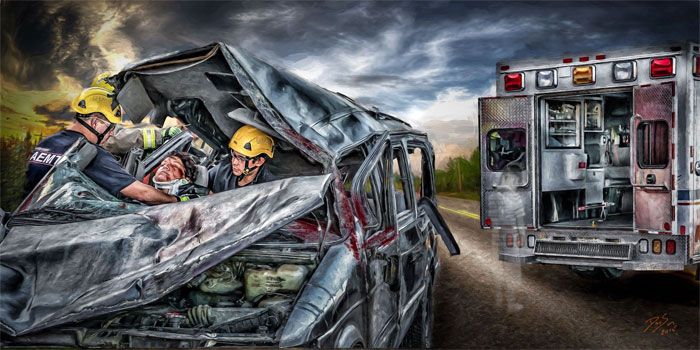 I have to be honest, when rolling up to a bad motor vehicle accident part of me wishes the occupants died instantly instead of still being alive and suffering.

The most pain and anguish I’ve seen in a patient is the driver of a vehicle that hit another car on the highway. He was still alive but his girlfriend was dead, resting against his side with her head crushed from the impacted roof. He couldn’t move to get out but he was well aware of what was happening.

I wonder what was worse for him, his own near fatal injuries or seeing his deformed dead girlfriend wedged against him.

I hate these calls.

Daniel Sundahl is a firefighter, paramedic and artist who creates portraits of EMS scenes inspired by his work in the field. View his artwork at DanSun Photo Art. Daniel is working on his second book, which is scheduled for release in October. Both of his books will be available on Amazon.