Be the good: How U.S. first responders took community service to a new level in 2022

What do paramedics want? Examining the 2022 EMS Trend Report

Ambulances and apparatus for Ukraine

Friendraising and fundraising in fire/EMS

She has some in her jump bag, her PPO bag and her flat vest — and also in her car, her truck and her purse. And she has taught all her loved ones how to properly use them, with the hope they will never have to.

At the 117th running of the Boston Marathon, EMS and other on-scene medical professionals were prepared to handle the usual influx of runner and bystander injuries that come from an athletic mass event. But for the physicians who were part of the medical team that day, the double bombing that occurred at just past 3 that afternoon in April dramatically changed not just the tenor of the event itself, but also how patients were evaluated and treated immediately after the incident began.

Such was the message of the opening presentation at the National Association of EMS Physicians’ annual conference held in Tucson, Arizona, January 16-18, 2014. Drs. Adam Darnobid, Ricky C. Kue and David J. Hirsch spoke to the challenges and success the medical teams experienced during the hour it took to evaluate, initiate austere care, and transport 118 patients to area trauma centers and hospitals. Several themes appeared during the presentation that EMS providers and organizations should consider when preparing for their own worst-case scenario.

Check out the biggest stories, the best videos and the most striking images.

Around 80 percent of the 2013 Boston Marathon bombing victims required a tourniquet, and there weren’t enough to go around. Many news stories told of people using belts, clothing, and anything they could get their hands on. Dwyer at one point turned to surgical drain hosing and a couple of Kelly clamps.

The changing faces of victims /survivors

She was in the medical tent attending to a runner when the first bomb went off.

“I remember thinking very quickly ‘We don’t do anything with cannons,’” she said. “By the time I finished the thought, the second one had gone off. And I knew.”

Everything was still for a moment, then she heard a wave of voices and pounding footsteps as people ran from the explosion, and an announcement inside the medical tent said to prepare to receive large numbers of casualties.

“It happened so fast, we didn’t have time to think what to do,” she said. It was mostly a blur, but she does remember her first patient, a middle-aged woman brought in with one of the wheelchairs reserved for fatigued runners at the finish line.

The woman had a blast injury to her left lower leg below the knee. Dwyer applied a tourniquet just above the knee, and marked her with an urgent, red triage tag.

“And went on to the next one,” she said. But unlike others she treated, Dwyer remembers her face.

“I’m pretty sure I’ve seen her afterward on some of the news reports,” she said. But she’s not certain; the healthy-looking person on TV is almost unrecognizable from the pale patient in her tent.

“The sickest people had lost such an incredible amount of blood,” she said. “They’re pink now. Before they were gray.”

Outside the tent, anyone with a medical background — and many without — was trying to help. Podiatrists carried victims and emergency room nurses yelled for IVs, but there were no IVs. Everyone had tunnel vision: save the life in front of you. They didn’t have Dwyer’s mass casualty training. 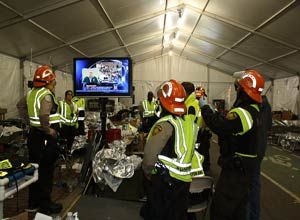 “Some of the more difficult aspects were working with a huge number of medical volunteers who didn’t know, OK, here’s the plan,” Dwyer said. One of her recommendations after the action was to provide functional awareness-level triage training to volunteers so they at least have a sense of how EMS service works in such a situation.

One of her most difficult moments was seeing either volunteers or bystanders calling for help for a victim in traumatic arrest.

“It was very difficult to let them know this is not a survivable patient and there’s nothing we can do,” Dwyer said. “I wouldn’t have had to have that conversation with an EMS provider. That changes the ball game, but we couldn’t have done it without them.”

The fact that a mass casualty incident structure was already in place at the Boston Marathon was also a best case scenario, and a saving grace.

Since the incident, Dwyer has heard many stories about survivors being reunited with rescuers, along with efforts to show appreciation toward Boston EMTs with gifts and recognitions.

“My instinct is, why don’t you give this to the patient?” she said. Watching many of the victims adjust to using artificial limbs has been thanks enough.

“It’s gratifying to see them up and walking around,” she said. “They’re going to be able to live productive, happy lives.”

Thanks! You've been successfully signed up for the EMS1 Daily