Briarcliff Manor, NY - Digitech Computer, Inc. today announced that collections for emergency transports under its contract with the Baltimore City Fire Department have outstripped projections by more than 50%. Based on current run rates, Digitech will collect several million dollars more from 2013 EMS transports than were collected in 2010, the most recent year for which data from fully resolved claims processed by the previous vendor is available. Collections per claim have climbed from $108 per claim in 2010 to a projected $160 per claim in 2013. Digitech began processing claims for Baltimore in December, 2012.

All municipalities that run EMS operations are entitled to reimbursement for their services from insurance companies, state or federal governments or individuals. But payment is highly dependent on accurate data and claims processing. “The increase in collections is the result of some courageous decisions made by Baltimore officials,” says Mark Schiowitz, CEO of Digitech. “Working with the outstanding leadership of BCFD, we were able to apply Digitech’s industry-leading technology to deliver vastly improved results at a time when every dollar counts for budget-constrained cities."

—First, the team developed an intensive training program to improve the quality of documentation of patient care by Baltimore EMTs. Deployed in combination with Digitech's PCR Lens tools, better documentation enabled Baltimore Fire to significantly improve the accuracy of field data collection, which in turn creates cleaner claims with fewer denials and appeals.

—Second, the team improved accuracy in transferring field data to the billing system, resulting in an immediate 32% increase in the number of billable claims. 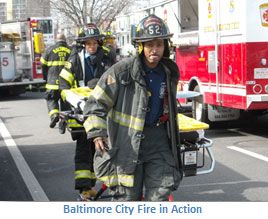 These procedural and policy improvements, in combination with Digitech’s leading-edge reporting tools, have enabled Baltimore City Fire to generate an up-to the-second accurate picture of EMS operations and stay on top of the department’s finances.

“With Digitech’s help, we’ve brought our EMS billing into the 21st Century,” says Jim Fischer. “It took some pushing, and change is never easy, but the results speak for themselves."

Digitech Computer, Inc. has been providing advanced dispatching and billing software and services to the medical transportation industry since 1984. The Digitech team includes veterans of the ambulance industry, technical experts, software developers, and billing service professionals. Digitech offers a rich blend of proprietary software technology and billing services with a flexible approach that adapts products to suit the unique needs of its clients. PCR Lens is an application that gathers electronic patient care data from emergency transport records into a suite of reports, enabling EMS leaders to pinpoint problems and direct training resources.