Suicide: This issue is real in emergency services

What HB No. 1069 means for first responders’ right to carry

Man who shot FF arrested on suspicion of manslaughter

NORTH LITTLE ROCK, Ark. — Pulaski County Sheriff's deputies arrested a homeowner on suspicion of manslaughter after a firefighter was shot to death while responding to a medical emergency call at a rural home near Little Rock.

Ameling said he could not discuss some of the details late Friday but said physical evidence and statements from Pruitt and his wife, Tonia, who were home during the shooting, led to the arrest.

Sheriff's office Capt. Carl Minden said early Friday that Adams, a volunteer with the East Pulaski Volunteer Fire Department, was responding to a 911 call of a person having a seizure at about 5 a.m. Friday when he was shot. Adams later died at a North Little Rock hospital.

Minden said Adams also worked as a full-time firefighter with the nearby Sherwood Fire Department.

After Pruitt's arrest, Ameling said Adams lives nearby and was the first on scene to the medical call. He said other emergency response personnel were trying to get to the address for the seizure call and were delayed because of the snow. 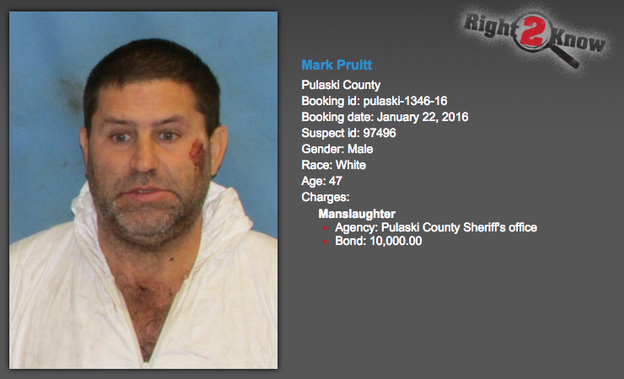 Ameling said they heard Adams call over the radio that he had been shot.

Pruitt was led out of the sheriff's office late Friday in a white jail jumpsuit and handcuffs. When asked why he shot Adams, Pruitt responded, "Somebody came in my house."

2 dead, 2 hurt in Texas after wrong-way driver collides with ambulance