What the 2020 EMS Trend Report reveals about the industry

Back to basics: Perfusion

Face masks: Here’s what cops, firefighters, medics and COs have to say about use, policy and effectiveness

What data tells us about EMS workforce injuries

WASHINGTON — For the first time, researchers reported the frequency and type of on-the-job injuries experienced by EMS providers. Audrey Reichard, an epidemiologist for the National Institute for Occupational Health and Safety, shared the results of a four-year research effort during an EMS Focus webinar. The NIOSH research sought to understand, count and categorize EMS provider injuries which are treated in the emergency department.

EMS agencies have a dual challenge to increase the size of the workforce and to better retain the existing workforce. Employers are encouraged to apply Reichard's findings to improve injury prevention efforts. For example, eyes were the top body site for exposure incidents treated in emergency departments. Reichard reported only 10 percent of EMS providers who had an exposure injury were wearing eye protection at the time of injury and the use of a face mask was so low the number was unreportable.

Reichard found that an average of 22,300 emergency departments treated EMS injuries per year. The majority of those injured were male. 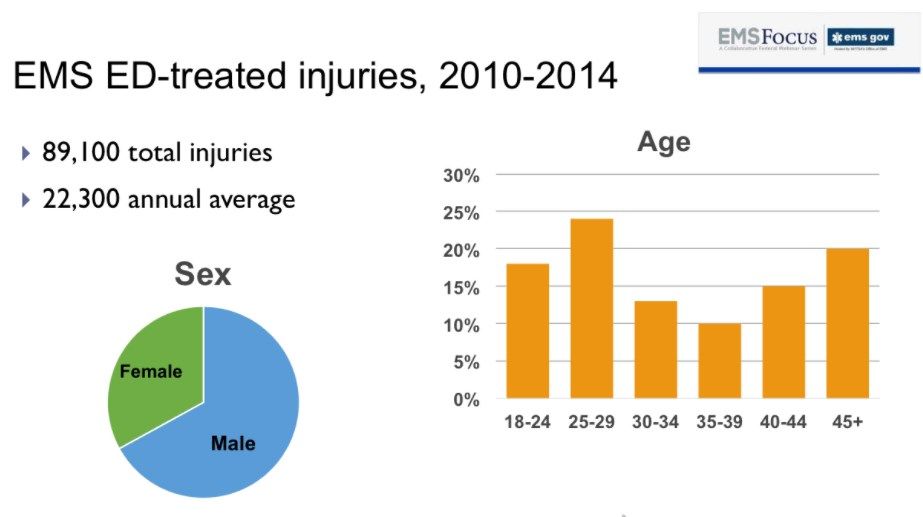 Three-quarters of EMS providers injured were full-time, career providers with less than 10 years of experience. 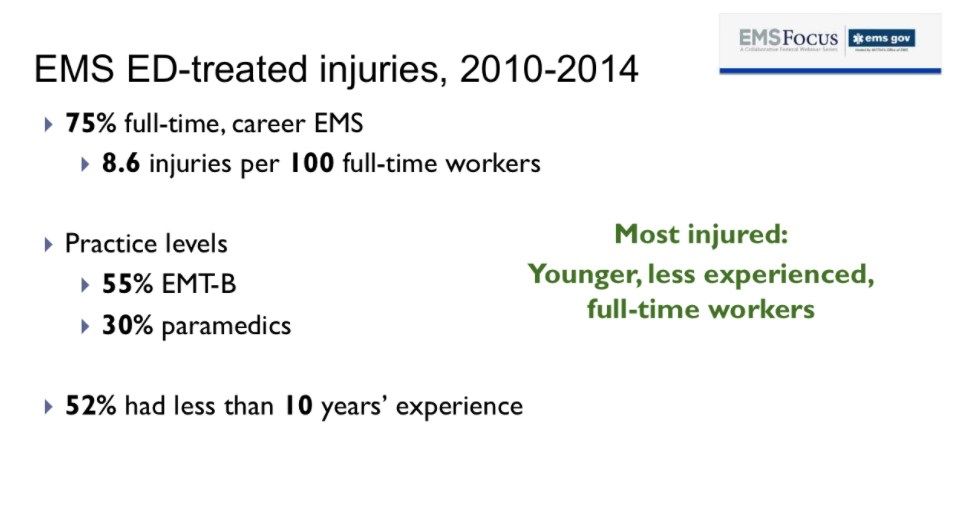 Sprains and strains were the most commonly treated injuries. Exposure incidents, wounds and musculoskeletal injuries were the next most frequently emergency department treated injuries. The trunk and neck were the site of injury for nearly one-third of cases. 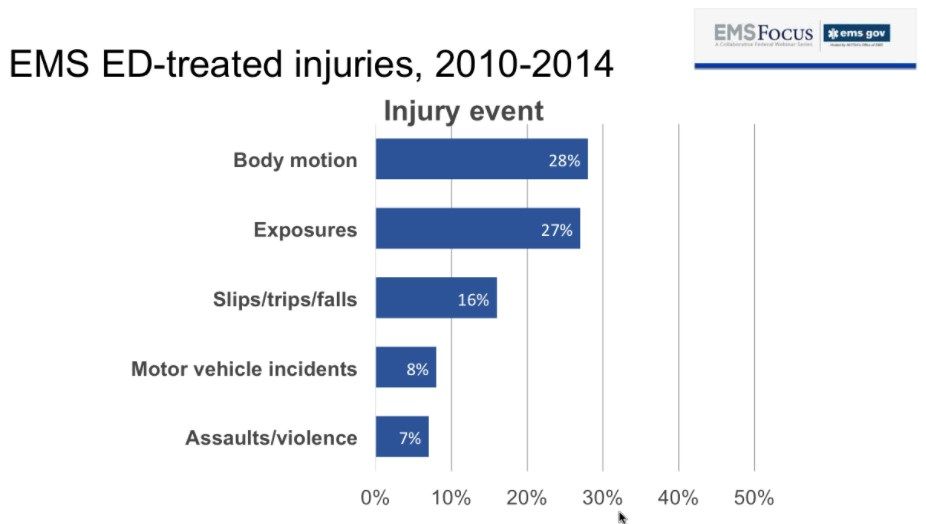 Body motion, including awkward posture and repetitive movement, were the most common event at the time of injury. Researchers calculated a body motion injury rate of 2.6 injuries/100 full-time EMS providers. Half of providers with body motion injuries missed one or more days of work.

Exposures to needlesticks and bloodborne pathogens were the second most common type of injury. Half of the EMS providers injured were 18-29 years old. Exposures were highest from needlesticks and being spat on by patients. Blood and respiratory secretions were the most common type of exposure. Though more than 80 percent of respondents were wearing gloves at the time of injury, only 10 percent had donned eye protection. 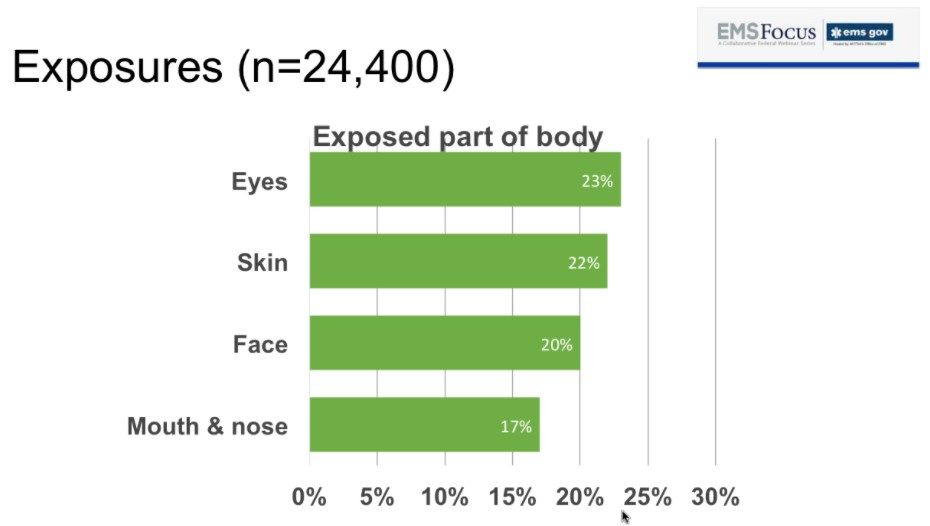 Here are memorable quotes on the NIOSH study of EMS workforce injuries and illnesses.

"You can't prevent what you don't know or understand. The first step is understanding the injuries happening to EMS providers."

"Half of the respondents injured while lifting reported a patient who was heavy or overweight."

"Violence was the least common type of injury incident, but we suspect violence against EMS providers was under-reported because many providers believe attacks are part of the job."

The results of the NIOSH study have been accepted for publication in an academic EMS journal. NIOSH is also developing a fact sheet for EMS employers. Waiting for those materials should not delay EMS leaders and field providers from applying these top takeaways.

2. Violence against a provider is never acceptable

Being violently attacked and assaulted by a patient or bystander is never to be brushed off as "part of the job." All violent encounters need to be reported and handled following an organization's standard operating procedure. That procedure should include, but not be limited to, management taking violent incidents seriously, reporting assailants to local law enforcement, providing EMS providers access to immediate injury assessment and treatment and explaining resources available for care of traumatic stress.

Overall, less experienced, full-time and younger EMS providers were found to be injured most often. But body motion injuries were most common in EMS providers over the age of 40. EMS leaders, health and wellness educators, occupational therapists and infection control officers should apply the findings of this research to develop specific training programs for different EMS workforce cohorts.

Reichard was one of three presenters in the EMS Focus webinar. Mike Szczygiel described the purpose and efforts of the National EMS Safety Council. Bryan McRay, Director of Safety for Richmond Ambulance Authority, discussed implementing an EMS culture of safety and what it looks like in the Richmond Ambulance Authority. The webinar is archived on EMS.gov, where other resources are also available for EMS leaders and field providers.

In addition, learn more about injury and violence prevention from these EMS1 articles.

Greg Friese, MS, NRP, is the Lexipol Editorial Director, leading the efforts of the editorial team on PoliceOne, FireRescue1, Corrections1, EMS1 and Gov1. Greg served as the EMS1 editor-in-chief for five years. He has a bachelor's degree from the University of Wisconsin-Madison and a master's degree from the University of Idaho. He is an educator, author, national registry paramedic since 2005, and a long-distance runner. Greg was a 2010 recipient of the EMS 10 Award for innovation. He is also a three-time Jesse H. Neal award winner, the most prestigious award in specialized journalism, and the 2018 Eddie Award winner for best Column/Blog. Connect with Greg on Twitter or LinkedIn and submit an article idea or ask questions by emailing him at greg.friese@ems1.com.