It's the 5th year of the EMS Trend Report. Complete this year's survey.

Pediatric anaphylaxis: How capnography can help assessment and treatment

Pediatric anaphylaxis, which is a systemic allergic reaction that can cause respiratory and circulatory compromise, is a high-risk situation that requires prompt recognition and treatment with epinephrine. Atypical presentations of anaphylaxis, combined with children's physiology, can make decisions about when to administer epinephrine challenging. Waveform capnography is a tool that can help providers of all levels assess, treat and monitor patients of all ages with suspected anaphylaxis.

Anaphylaxis starts with an exaggerated immune response to an allergen. The most common triggers in children are food — usually nuts, seafood, milk, soy, medications and insect envenomation [1]. After exposure to the allergen, histamine and other chemical mediators cause inflammation in an attempt to neutralize the foreign substance.

With a simple allergic reaction, the inflammatory response is localized and only affects the area exposed. In anaphylaxis, this response is systemic and life-threatening. Anaphylaxis usually begins shortly after exposure to the allergen, but can occur minutes or hours later, and can also recur, which is a biphasic reaction, hours after successful treatment.

Anaphylaxis typically, but not always, affects two or more body systems, and usually begins with the skin. Eighty percent of patients present with itching, hives and flushed skin color across a large surface area [1].

Pediatric anaphylaxis overview
Anaphylaxis can cause respiratory and circulatory compromise through:

Diagnosing anaphylaxis, and differentiating anaphylaxis from a simple allergic reaction, can be difficult in pediatric patients. Normal vital sign ranges and behavior vary with age, and many EMS providers get little experience caring for children. Young children may not be able to report their symptoms or what they were exposed to, and may cry during assessment. Also, atypical presentations of anaphylaxis do not affect the skin; some children in anaphylaxis will only have gastrointestinal syndromes or hypotension from vasodilation, which can make the diagnosis even more challenging. 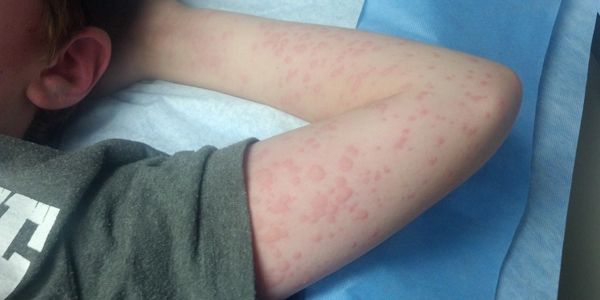 When in doubt, treat for anaphylaxis. 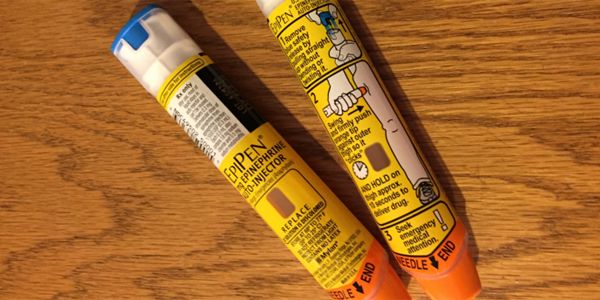 Use an adult EpiPen on a child heavier than 30 kg. (Photo courtesy of Greg Friese)

Administer epinephrine intramuscularly in the anterolateral thigh and repeat every five minutes if symptoms persist. Whether using an EpiPen or drawing epinephrine from a vial with a syringe, use a reference card and medication cross-check to ensure that epinephrine is given at the correct dose, concentration, and route.

After epinephrine, administer intravenous or intraosseous fluid to patients with hypotension and administer albuterol to patients with bronchospasm. Other treatment includes administration of antihistamines, such as diphenhydramine (Benadryl) and ranitidine (Zantac), and a steroid to inhibit inflammation, such as methylprednisolone (Solu-Medrol) or prednisone.

The role of capnography in pediatric anaphylaxis
Waveform capnography provides real-time, breath-to-breath feedback on ventilation and perfusion. Through a sample of exhaled air captured from nasal prongs or an adaptor connected to a bag-valve mask or advanced airway device, each exhalation generates a rectangular-shaped waveform on the capnograph.

Capnography also measures respiratory rate and the amount of carbon dioxide exhaled with each breath. Normal ETCO2 is 35-45 mm Hg, which is consistent across all age groups. When incorporated into a physical exam, waveform capnography can help identify respiratory and circulatory symptoms of anaphylaxis in children, and determine if treatment is working.

When assisted ventilation is needed, capnography can be used with the BVM to provide feedback on whether ventilation is effective and to guide respiratory rate. If no waveform appears with each squeeze of the BVM, check for proper airway positioned, mask seal and tidal volume.

Bronchospasm from anaphylaxis can also be diagnosed with capnography. A slurred, shark fin capnogram is diagnostic of bronchospasm, even when wheezing cannot be heard. This identifies which anaphylaxis patients should receive albuterol, after epinephrine administration. 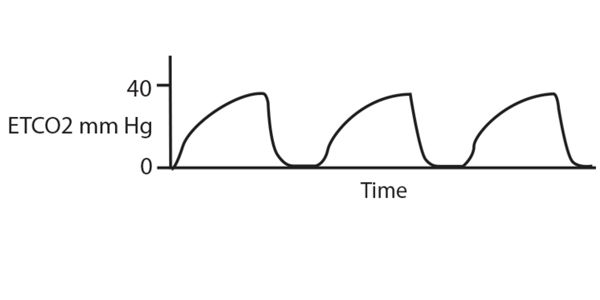 The more severe the bronchospasm, the more pronounced the shark fin. As air exchange worsens in the lower airways worsens, CO2 is not be eliminated effectively and it builds up in the lungs. This causes an increase in ETCO2, which suggests respiratory failure and the need for assisted ventilation.

Capnography and circulatory compromise in anaphylaxis
Waveform capnography can also be used to assess perfusion. ETCO2 depends on adequate blood flow to the lungs to excrete carbon dioxide. In shock there is less blood flow to the lungs, and less CO2 gets excreted with each breath. A study of children with vomiting and diarrhea from gastroenteritis found that ETCO2 less than 31 mm Hg identified metabolic acidosis from shock and the need for intravenous fluid [3].

Capnography can help detect atypical presentations of anaphylaxis and identify children who in shock, but still compensating. Look for low ETCO2 along with delayed capillary refill and low blood pressure to identify the need for epinephrine.

Capnography and response to treatment for anaphylaxis
After administering epinephrine and initiating treatment for breathing and circulation, the next decision is whether repeated doses of epinephrine are needed. For patients with respiratory symptoms, look for the slurred waveform to shift to a rectangular shape and for ETCO2 to shift to the 35-45 mm Hg range.

For patients in shock, look for ETCO2 to increase as perfusion improves. If there is no improvement after five minutes, administer a second dose of epinephrine.

Pediatric anaphylaxis is a can't miss diagnosis. When used with history, physical exam findings and vital signs, waveform capnography can help make the diagnosis and determine when anaphylaxis treatment is working. Remember though to treat anaphylaxis as soon as you recognize it, which may be before or after applying capnography.

Quiz: How much do you know about sepsis?