The greatest leadership challenge in EMS

'The great debate': Are degrees necessary in EMS?

How I survived in-flight anaphylaxis

We were flying in the medical airplane back to our base when I told my flight nurse partner, Kelli, that my lips felt swollen.

She gave me a "that's not funny" look, but whipped out her penlight and looked at my face.

"They don't look like it. Are your lips numb," she asked?

The next look in her eyes I will never forget. Kelli tried to make light of the situation with a joke, but it was this moment when I realized something was very wrong.

I have gained a wealth of knowledge and experience in the last year and a half as a flight paramedic, but this is the flight that comes to mind most often. It happened only four months after I started flying.

It was a warm day at the beginning of June, and I was at the end of a rotation while my flight nurse partner was just starting her rotation. We delivered our patient to the receiving hospital without incident, and were on our way back to the local airport and our medical airplane. My back ached from a strain, so when we returned to the airport, I took a combination of acetaminophen and naproxen sodium. It was a combination I'd taken before with no problem.

There was already a plan to retrieve a medic from another base to replace me so I could rest my back. I assured my partner and pilots I was fine, and the medication would help. So we took off to our headquarters to trade out a broken piece of equipment first.

That was when my hands felt hot and started to itch terribly. I mentioned it to Kelli, and we made a joke of it.

A short time later we landed at the headquarters location, traded equipment and by the time we were airborne again, a few minutes later I realized my face felt odd. It was tight, tingly and swollen. I was also suddenly very hot, all over, so I pulled down the upper part of my flight suit and tied the sleeves about my waist. Then I told my partner my lips felt swollen.

Just after heeding Kelli's order to get on the cot, I felt a lump in my throat and suddenly it was hard to take a breath.

I told myself to stay calm. My partner was trained to deal with this. So was I.

My partner turned on the cabin lights and I saw her hesitate only slightly as she caught sight of my upper body. Parts of my skin, visible around my shirt and flight suit at my waist, were red and splotchy.

I now itched from head to toe.

Even as her eyes hesitated, she was pulling her IV start pouch from a flight suit pocket. This 10-year flight veteran was stuck somewhere between being a professional reacting on instinct and being my friend and mentor. She left my side to talk to the pilots.

All I remember is her saying, "She's reacting to something," before she was back.

The atmosphere of the aircraft shifted and suddenly it felt like a real mission. Except I was the patient. I was on the cot, not in the paramedic seat. Kelli was alone.

My head felt heavy. My heart was racing. I felt disoriented and tired.

No answer, but the look she gave me when she grabbed my wrist to check a pulse said it all.

The cardiac monitor came after the IV. I still couldn't believe this was happening to me.

"Is this all in my head?" I asked Kelli.

She turned the monitor around so I could see it.

"No. It isn't," she said in that tone of voice she reserves for the special questions.

I looked away from the rate and rhythm to the low oxygen saturation and then to the low blood pressure.

Next, I heard the airway drawer slide open. She put me on oxygen.

Then she was talking to the pilots again. She readied the satellite phone at our dispatcher's request and then she was back at my side.

"How are you doing?" she asked.

I do not remember my specific answer, but I do remember feeling terrified. That tiny human part of me programmed to panic, the one restrained through knowledge and training, wanted desperately to panic.

I didn't. Instead, I forced myself to mirror her composure. I could see the worry in her eyes, but I refused to panic. I wouldn't panic until she panicked.

The satellite phone rang. Our medical director asked Kelli what she needed. She gave him a full report, suddenly separating her patient from her partner as her nurse training took over.

She repeated orders, and in my head somewhere, the medic in me tuned back on. I needed to help her.

I offered to mix the Solu-Medrol, but that was when I realized my hands were swollen and I couldn't bend my fingers. I couldn't even hold onto the vial, much less depress the plunger to mix the powder and liquid.

Somehow she heard me despite the engine noise. Or, she saw the look in my eyes. Either way, she knew.

For a second, she stared at me. Then, she took hold of the vial and mixed it while moving faster around that airplane cabin than I'd ever seen her move.

Suddenly, she'd given me methylprednisolone (Solu-Medrol) and diphenhydramine (Benadryl), the fluid bolus was going and we were descending rapidly toward the airport in the city we'd just left. Kelli had items stowed, her flight suit pulled back up from her waist and was preparing me for unloading.

But all I could think about was how it was getting harder to breathe. And I was nauseous.

She was at my side before I'd finished talking, already injecting ondansetron (Zofran) into the IV line. Then she held my hand and talked me through the sudden panic I felt.

"It's the descent," she told me. "Remember how I said some people feel worse."

Next, the door opened to reveal paramedics ready to jump in and help my partner, only to find she had everything done that could be. Then the captain was sitting next to me as the first officer slipped down the stairs of the airplane to help unload me onto the EMS cot.

I was still disoriented, and everything after the unloading is a blur except for the feeling of my partner right next to me during the ride in the ambulance. It was the only thing that kept me focused and calm, because I felt so awful I was sure I was going to get worse before I improved. 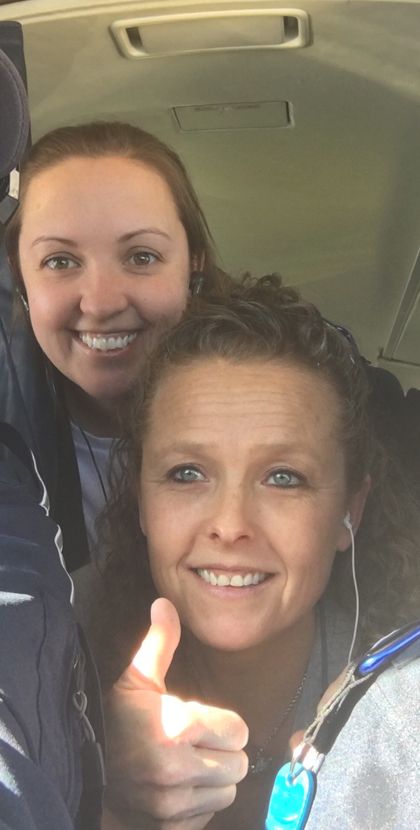 Baldwin and her partner Kelli, the flight nurse who treated her. (Courtesy photo)

Obviously, I survived. And I was lectured by Kelli after the fact. I also heard from our medical director, the emergency department physician who attended to me, and a few other colleagues and friends about why I should have told my partner it was hard to breathe.

You might be asking the question I have heard from many paramedics, why didn't she give you epinephrine? Or you're thinking you would have given me epinephrine without a second thought. Or, thinking that everything here seems completely appropriate to you.

I was trained, as was my partner, that epinephrine should be given in an allergic reaction only if there are obvious signs of airway compromise. As I learned through this experience and my research, the newer practice is to give epinephrine at the first sign of a severe allergic reaction or anaphylaxis, with or without a complaint of difficulty breathing.

My experience is an example of why it is so important to keep up to date on medical research. The practice of medicine changes often. It is important to stay informed and always search for more knowledge. Take continuing education seriously and strive to increase knowledge each time you teach or attend training. Do not become complacent and do not resist change simply because of a "this is the way we've always done it" belief.

Each time I put on my flight suit, I briefly think of that flight. When I catch sight of the silver one-year anniversary wings pinned to my name badge, I am reminded of all that I have to live up to in my career. I am reminded what it feels like to be the patient. I remember the fear and panic, the distortion of time in my mind, and I remember to be more sympathetic and less callous.

Back to the basics: Anaphylaxis