In the prehospital environment, it is time to pronounce direct laryngoscopy dead. And video killed it.

We knew direct laryngoscopy, commonly referred to as DL, was sick a decade ago when the foremost authority on airway management in emergency medicine, Dr. Ron Walls, reviewed an article on NEJM Journal Watch where he wrote the comment, "Why do clinicians cling to direct laryngoscopy when video laryngoscopy clearly is superior? [1]"

Since then, a number of video laryngoscopy or VL products on the market have increased and the price has fallen.

The procedure of intubation has been a mainstay in most EMS systems. In the early 2000s, the ability of paramedics to perform intubation safely was called into question by Katz, et al [2]. Their article forced many systems and medical directors to look closely at their personnel and protocols to ensure that intubation was being done safely. About the same time, waveform capnography came onto the scene.

The technology of video laryngoscopy might be a bigger game-changer than capnography.

The revolution of VL starts with the concept that it is a completely different skill than DL which may get lost in airway management discussions since both procedures facilitate intubation. This has been further muddied since there are now a number of VL devices that require a DL technique. However, not all VL systems are revolutionary.

Dr. Jeffery Jarvis, Medical Director for the Williamson County (Texas) EMS System, observed that VL devices fall into two categories, displacement and non-displacement. Displacement VL blades, like DL, require manipulation of the upper airway anatomy. A camera is fashioned onto a standard laryngoscope blade and the same techniques are used to intubate. This has some virtues particularly when training a clinician in DL or to facilitate foreign object removal from the airway. However, it does not seem to solve any problems that a good intubator wouldn’t be able to solve with good, standard technique DL.

In fact, when comparing displacement VL to DL, several studies find no difference in in success [3, 4].

Non-displacement video laryngoscopy is the revolution

Endotracheal tube insertion occurs with little or no manipulation of the upper airway by placing a camera in the back of the oral pharynx so the clinician can observe the trachea. Since the axes of the mouth, oral pharynx and tracheal opening are not in alignment, the tube must negotiate an angle to properly glide into the trachea. A rigid stylet or channel facilitates the negotiation. And it is astonishingly easy to intubate.

Eagle County Paramedics in Colorado went all-in on VL in early 2009 placing Glidescope Ranger products on all of our ALS units. Prior to the rollout, our intubation success rate was 79 percent with over 30 percent of patients requiring multiple DL intubation attempts. Today, the success rate hovers around the 97 percent with 95 percent of the patients being intubated on the first attempt.

Direct laryngscopes have been removed from the jump kit, but are still available on the ambulance. Protocol mandates VL when intubating.

Since our rollout, other studies have been published that validate our experience has been no fluke. Jarvis published his conclusions in 2015. His system saw similar increase in success rates with the King Vision system [5].

A significant barrier that needs to be removed in order to see this success is to acknowledge that non-displacement VL is superior to DL, particularly with clinicians who are not intubation experts.

It is through rigorous training, continuing education and opportunities to practice on mannequins and live patients that we become competent in DL and skilled in intubation. It takes thousands of live patient intubations to encounter most of the possible clinical variables and scenarios to become an expert. Most paramedics do not have that kind of experience and for the few that do it took years to gain. It is unlikely that an entire system is comprised of medics with this level of DL and intubation expertise.

Multiple studies indicate that non-displacement VL is superior to DL particularly in inexperienced intubators [6]. Why are systems and paramedics hesitant to adopt the new technology? Why did one paramedic in a Twitter conversation with Jarvis reportedly write, "You can have my laryngoscope when you pry it from my cold, dead fingers."

Perhaps Karl E. Weick, PhD, from the University of Michigan can offer insight. Weick is the author of several articles where he examined conditions that led to the deaths of wildland firefighters, including the Mann Gulch fire featured in Norman Maclean's "Young Men and Fire" [7,8]. 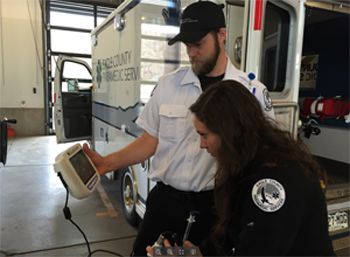 In a keynote presentation, "Drop Your Tools: On Reconfiguring Management Education" Weick speaks about how uncomfortable it can make us to "drop our tools," which he describes in a literal and metaphorical sense [9, 10]. Wildland firefighters' identities may become intertwined with their role on the crew or the tool they carry. When threatened by fire, even when ordered to drop their tools, Weick notes that many did not and it may have cost them their lives. Perhaps, he further notes, by dropping one's tool and running, one is no longer a firefighter — essentially admitting defeat.

This was a situation of literal life and death, yet Weick notes that it is human nature to cling to previously held concepts. Direct laryngoscopy is a skill few in medicine possess — physician specialists, nurse specialists and paramedics.

Overwhelming data that displacement-VL is superior to DL and can be done very well by inexperienced providers, that some systems and paramedics are loathe to do so perhaps because doing so is admitting defeat.

To get the best out of VL, strongly consider systems that are non-displacing. Standard DL blades with an integrated camera seem not to offer the same benefits. Here are three things that will be critical to successfully transitioning your EMS system to VL.

1. Training
Paramedics must be trained in the new system. To reap the benefits of non-displacement VL, it must be learned and practiced as DL was. This should include didactic training on the system itself, which may include operational details, as well as the technique for using the system.

Next, clinicians should repeatedly practice on a task trainer. Lastly, if the system has the ability to do live intubations in a clinical setting, each should experience live intubations with the system they will be using the field. One of the biggest hurdles to successful implementation is the failure to train on VL as a new skill. Clinicians can quickly become frustrated if they are not training properly.

2. Regionalization
Consider regionalizing your equipment. There is likely benefit to ground, flight and hospitals standardizing on a product for ease of training and perhaps more competitive pricing. An emergency medicine physician who is well-versed on the VL system the field staff are using may be able provide better on-line medical control. A difficult airway in a small, rural emergency department might be more easily managed when the flight medics and physicians are trained and using the same equipment.

3. VL first
Acknowledge that non-displacement VL is superior to DL. Force the issue through protocol and equipment allocation. My agency still has DL on the ambulance as a backup, although we have never had a failure. Of course, the VL device can fail, however, that's a risk that isn’t new. Burned bulbs, cracked blades and dead batteries plagued DL long before VL came along. Agencies that remove DL should still have BLS and ditch airways that were used as back-up airways before adopting VL.

Direct laryngoscopy is dead. Saying so isn't admitting defeat. It's winning the airway.

About the author
Will Dunn is the clinical manager for Eagle County Paramedic Services, in central Colorado where he oversees the practice of paramedics in a world class ski resort that includes typical 911 response, wilderness and backcountry medicine, as well as a paramedic-based critical care transfer program. Will continues to pursue EMS-related research projects and lectures on EMS topics locally and nationally. Email him at wdunn@ECParamedics.com and follow @dunnww.