4 things paramedics need to know about capnography and heart failure

Heart failure occurs when the heart is unable contract effectively, which affects both respiration and perfusion. Common causes of heart failure include hypertension, myocardial infarction, valvular insufficiency, and dysrhythmias [1].

Failure of the left ventricle causes blood to accumulate in the pulmonary vasculature, which increases pressure in pulmonary veins and pushes fluid into the lungs. Pulmonary edema, the fluid accumulating in the lungs, obstructs the lower airways and causes alveoli to collapse, which impairs oxygenation and ventilation and increases work of breathing.

On the other side of the left ventricle in heart failure, less oxygenated blood is circulated to vital organs. The body releases epinephrine and norepinephrine to compensate, which increases heart rate and constricts blood vessels.

Decreased perfusion to the kidneys also triggers the release of renin, angiotensin and aldosterone, which causes fluid retention as well as vasoconstriction. The result is increased pressure that the left ventricle must pump against (afterload), and more blood returned to the heart to be circulated (preload) [1,2].

Increased preload, afterload, and heart rate in heart failure add stress to heart muscle that is already weak, which worsens pulmonary edema and myocardial damage. Cardiogenic shock occurs when these compensatory mechanisms have failed and the heart cannot meet the body’s metabolic demands. Patients in cardiogenic shock present with pulmonary edema and hypotension, often along with altered mental status or unconsciousness [1].

If the pump problem is not corrected, heart failure patients are at risk both respiratory failure and circulatory collapse.

2. Capnography can help identify heart failure from other causes of respiratory distress.

Pulmonary edema causes crackles or rales, wheezing or diminished breath sounds which can be heard on auscultation over the affected area of the lungs. Wheezes from heart failure are caused by fluid obstructing the lower airways, or a cardiac wheeze, which is a different mechanism than wheezing from bronchoconstriction caused by asthma or COPD. While the presentations can be similar, difficulty breathing from heart failure requires a much different treatment plan than for asthma and COPD.

Capnography can be used to differentiate pulmonary edema from bronchospasm, which is especially useful in patients who have a history of both heart failure and COPD or asthma. A normal capnography waveform is a crisp, rectangular shape, but in patients with bronchospasm it has a slurred upstroke, or “shark fin” appearance. CO2 diffuses well across fluid in the lungs from pulmonary edema, and the capnography waveform will have a normal rectangular shape, even if the patient is wheezing or has diminished breath sounds.

A word of caution: pneumonia can also cause patients to have crackles on auscultation and a rectangular shaped waveform on the capnogram, as well as low pulse oximetry. A through history and physical exam is needed to differentiate heart failure from pneumonia.

During the physical exam look for signs of heart failure like pale and diaphoretic skin, jugular venous distention and dependent edema. As you collect the patient's history listen for complaints of chest discomfort suggestive of ischemia and a productive cough of frothy white or pink sputum,

Crackles from pneumonia are localized to the area affected by infection, and are usually unilateral. Gradual onset of cough productive of clear or dark sputum, sharp chest pain that increases with fever and dehydration are additional signs and symptoms of pneumonia.

3. Capnography and blood pressure help identify the severity of respiratory and circulatory compromise from heart failure.

The amount of exhaled carbon dioxide, the ETCO2, at the end of exhalation depends on the amount of blood circulated to the lungs, as well as how well CO2 moves through the lower airways. Normal ETCO2 is between 35 and 45 mm Hg.

Because heart failure affects circulation and ventilation, either aspect may cause an abnormal ETCO2 reading. They key is to understand how blood pressure relates to capnography to assess respiration and perfusion.

To compensate for increased work of breathing from heart failure, the patient may initially hyperventilate and blow off excess CO2, which would cause hypocapnea, ETCO2 less than 35 mm Hg. The sympathetic response from heart failure also initially causes hypertension. If a heart failure patient has a normal to low ETCO2, and a normal to high blood pressure, this indicates that they are compensating for their respiratory distress and that perfusion is adequate [2].

As heart failure worsens, less surface area of the lungs is available for oxygenation and ventilation.  Fatigue from increased respiratory effort leads to shallow respiration, which leads to CO2 retention, or hypercapnea. If a heart failure patient’s blood pressure is normal or elevated, and ETCO2 is high, above 45 mm Hg, this suggests respiratory failure [2].

In cardiogenic shock, less blood is circulated to the lungs and less CO2 is eliminated. If the patient is hypotensive with pulmonary edema, and ETCO2 is low, below 35 mm Hg, this indicates inadequate tissue perfusion [2]. The capnograph may also have a rounded “tombstone” shape in low perfusion states [3]. 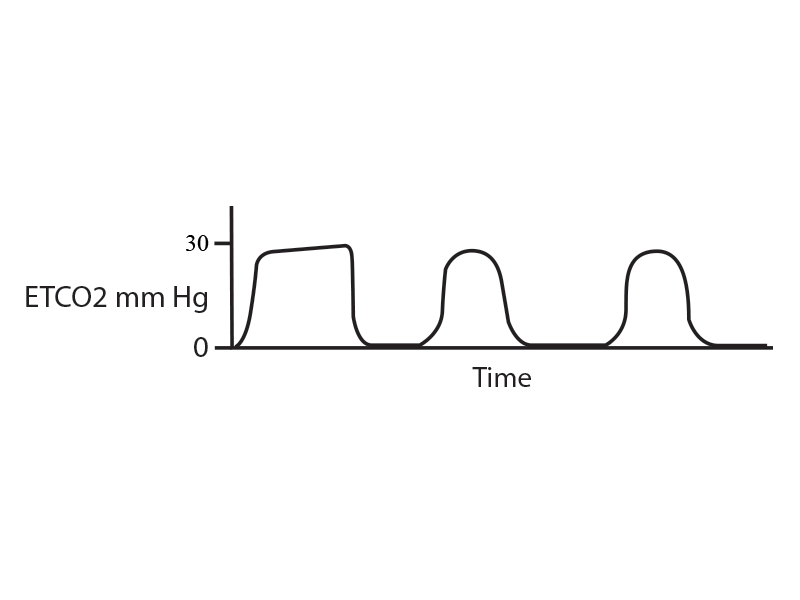 The treatment goals for heart failure are to improve oxygenation and ventilation, decrease work of breathing, decrease the workload of the heart and to maintain end-organ perfusion.

CPAP and nitroglycerin are the mainstay treatments for heart failure in normo to hypertensive patients. CPAP increases pressure in the lower airways on exhalation, which opens collapsed alveoli, improves oxygen exchange and pushes fluid in the lungs back into pulmonary circulation.

Nitroglycerin reduces preload by causing arterial and venous vasodilation. This decreases the workload of the heart and helps shift fluid from the lungs into pulmonary circulation. Some EMS protocols also include furosemide, a diuretic that also decreases preload through fluid elimination.

Changes in capnography will be seen immediately after treatment takes effect. After CPAP is applied, ETCO2 may increase initially as the patient acclimates to it, and then normalize if their work of breathing and cardiac output improve [4].

However, if ETCO2 continues to increase despite treatment, the patient’s distress is getting worse. In a study at one hospital’s emergency department, 100 percent of patients whose ETCO2 increased more than 10 mm Hg after CPAP was applied required intubation [4]. Trending ETCO2 can identify respiratory failure before the patient’s mentation changes, and buys time to develop a treatment plan.

For patients in cardiogenic shock — pulmonary edema, hypotension and hypocapnea — the goal is to increase the heart’s contractility in order to maintain perfusion. Infusion of dopamine, dobutamine, norepinephrine or epinephrine may be administered to maintain perfusion. Because these medications increase the workload of an already damaged heart, they should be titrated to achieve a blood pressure no higher than 80 to 90 mm Hg systolic. In this case, rising ETCO2 suggests that circulation is improving, and capnography provides continuous feedback on circulatory status in between blood pressure checks.

Nitroglycerin and CPAP are contraindicated in patients who are hypotensive. Administer oxygen via nonrebreather mask to patients with respiratory distress or assist ventilation with a BVM for patients with signs of respiratory failure with cardiogenic shock.

Waveform capnography is a valuable tool to monitor ventilation and circulation in patients with heart failure. Use it to identify heart failure from other causes of difficulty breathing, identify respiratory distress from respiratory failure, identify cardiogenic shock and monitor response to treatment.