‘Modern Day Rosies’: How one paramedic channeled her pandemic emotions into a tribute to female essential workers

Article Bites: Measuring the impact of a telehealth program on ambulance transports

Article bites: Is eCPR the future of refractory vfib management?

Vaccine status and professionalism in a politically charged environment

When a medic dies

Can public safety employers require employees to get the COVID-19 vaccine?

Research analysis: ‘ECMO is a useful tool but not a magic bullet’

ETCO2: Back to the basics

Add your voice to the 2021 EMS Trend Report, now open

Training and preparation makes the difference, but it's still a shock

EMS is in the business of preparing for the worst and hoping for the best. To do that, we create plans, train our personnel, and maintain equipment and resources at great cost in the hopes of never using it. It's an exercise in the abstract, the "what if" scenarios.

Then there's the events that happened at the Boston Marathon on April 15 that makes it all too real.

The first few seconds
For the past nine years, Danielle Hickey has been an EMT with Boston EMS (BEMS). On that day she was working with her partner, out of a standby ambulance staged near the Marathon finish line.

She was fairly close to the scene when the first blast happened. "I heard this 'boom' and felt the force of the explosion," she recalled. "I thought it was a bomb almost right away. Then the second device exploded.

"I had a brief moment of panic," Danielle said. "I was immediately concerned about another crew that was in the area, about their safety." After the first few moments, her training kicked in. "I just went on autopilot," he said. "My partner and I started pulling gear together and made our way toward the first blast site."

Boston paramedic Katherine Dwyer was in the Marathon medical aid tent treating patients from the race. The tent stretched across the city block and was designed to handle dozens of patients simultaneously. There were not many people in the tent.

"It was pretty quiet and routine," Katherine said. She was focused on a task when the first blast occurred. "I thought, 'I don't remember that there were celebratory fireworks involved with the Marathon.'"

Time stood still for a moment. "It got real quiet. No one moved or said anything. Then, you could hear the second explosion. We all knew then something major was happening."

In major events like this, the surreal sometimes happens. Katherine had that moment. "After that moment of stillness, I could hear this noise," she said. "First it was quiet, but became louder and sounded like it was getting closer."

"I realized that it was people running toward the tent, away from the explosion site. It was the sound of their feet and voices as they were trying to get away."

Katherine felt torn for a brief moment. "I had a moment of hesitancy – do I stay here or do I go into the scene?" she said. An announcement inside the medical tent provided the answer – prepare for receive large numbers of casualties.

"I trusted the other (BEMS) crews that they would do their job," Katherine said. "My place was here (in the tent)."

From the street level to senior command, the change in routine was dramatic. Deputy Superintendent of Dispatch Operations Joe O'Hare was in the unified command area when the incident began.

"We knew almost immediately that something major had happened, watching the (television) cameras" he said.

Within seconds of the second blast, police radios crackled to life. "Very quickly reports were coming in from the site."

Because of the Marathon, the dispatch center had been up staffed. Joe went from the command room down to the communications center to check in with the staff. "They had already implemented a disaster communications plan," he recalled.

Within the first few minutes, Boston area hospitals were notified of incoming casualties, and mutual aid ambulances were responding to the staging area.

These first few steps proved to be pivotal to the saving of lives that day.

The storm
Back at the scene, the next 30 minutes for Katherine, Danielle and other BEMS crews were intense. Danielle waded through the crowd of runners and bystanders that were moving in the opposite direction. The site was littered with victims, smashed equipment, backpacks and other debris.

There were also many medical volunteers from the Marathon and bystanders who were trying to help the victims.

Danielle recalled, "It was amazing to see people using anything they could get their hands on. Several helpers used shirts and belts to create makeshift tourniquets."

Danielle helped with the first wave of triage, and trying to provide care. Victims had predominantly major soft tissue injuries from the waist down, characteristic of improvised explosive devices (IEDs).

Danielle quickly used her own tourniquet and turned to other equipment in the kit she was carrying, like cravats and even oxygen tubing.

Back at the tent, Katherine was quickly inundated with category red patients. "Time became a blur," she said. She focused on handling each case.

"I would work on one patient, then turn to another patient who had just arrived in the treatment area. When I turned back to the (previous) patient, that one had already been taken out and transported."

In addition, the bike teams, foot teams, and personnel on a variety of four wheel vehicles provided additional resources. "We were quite fortunate that this was 'an MCI within an MCI,'" Joe said.

The challenges
In the initial phase of the response the volunteers and bystanders were very helpful. The distance between the blast site and the medical tent was about a hundred yards. Many of the first patients were moved across that distance by a platoon of medical volunteers with wheelchairs originally designated for the race.

Managing all of the additional help was also a challenge. Both Danielle and Katherine had to direct non-EMS personnel to help more effectively, which included getting out of the way. "People really wanted to help," said Danielle. "But not trained or prepared (to assist in an MCI) made it tough."

One set of volunteers was performing CPR on a mortally wounded victim of the blast. Another volunteer really wanted a patient, who had lost a leg but was otherwise stable, to be transported.

"Overall, people were well meaning," Katherine recalled. "We had a job to do. Telling people to stop what they were doing and redirecting them to help in more effective ways added to the stress."

Equipment also proved to be a challenge. Ambulances were rapidly stripped of their supplies, often by non-BEMS personnel. For the first few minutes, it was a challenge to get supplies from a pre-staged cache trailer to the blast site. Eventually the equipment was hand carried over. 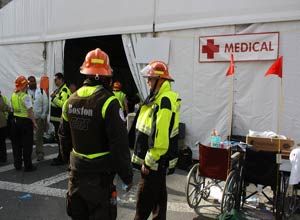 "I knew that our MCI plan was kicking in when I started seeing patients being carried into the tent on backboards, rather than by wheelchairs," Katherine said.

Deputy Superintendent O'Hare was concerned about the welfare of the crews. "Boston PD was telling us that they needed to clear out the EMS folks, since there were reports of additional IEDs on scene," he recalled.

When crews were told of this, their response was emphatic – they were staying on scene.

"Our people knew that the scene was dangerous, but they had to do what they needed to do."

The aftermath
In the days after the event, the crews went into recovery mode and tried to make sense of what they seen and done. Both Danielle and Katherine went to work the next day. "I was irritable," Katherine said. "Normally you have a lot of patience with the day to day calls."

Danielle agreed. "It's been a rollercoaster of emotions. Shock, confusion, anger, sadness – it's been crazy."

Several operational and stress debriefings occurred very quickly after the event. Assistance was provided to anyone who needed it. Not all of it has been official or formal. According to Katherine, "I'm normally not into "warm and fuzzy" things like this, but it's been really helpful to talk (with colleagues and friends)."

While everyone agreed that some things could have gone better, overall they felt positive about what happened in terms of the response.

Donations have been pouring into the department's relief fund, including a $20,000 check from Walgreen's. "Normally, the public never really sees what EMS does on a day-to-day basis," Joe said. "They got a sense of a system they should really be proud of."

Danielle and Katherine attributed their training and sense of duty as major foundational blocks that contributed to a successful operation. "We're trained to be able to react to these events," Katherine said. "Stay focused, perform as you were trained and things will get done."

Special thanks to Jennifer Mehigan, Boston EMS PIO, for helping to organize the interviews.

Lawyer: Only 1 paramedic on scene in 1st 40 minutes after Manchester bombing