How capnography can be used to identify sepsis

Sepsis is a worldwide public health issue. In developing nations, sepsis accounts for nearly 80 percent of deaths [1]. Here in the U.S., sepsis kills far more citizens than AIDS, prostate cancer and breast cancer combined. It is the leading cause of death in the noncoronary ICU. Worldwide, sepsis is more common than heart attack. Since our methods for gathering sepsis data rely solely on tracking hospital admissions, it is unknown how many cases of uncomplicated, nonhospitalized sepsis occur each year, but the number is almost certainly in the millions.

Sepsis in the U.S. has a mortality rate ranging from 28-50 percent, and even though it occurs in only 10 percent of hospitalized patients, it is linked to at least half of all in-hospital deaths [2]. The Agency for Healthcare Research and Quality lists sepsis as the most expensive condition treated in U.S. hospitals, with a price tag of over $20 billion in 2011.

Between 2000 and 2008, sepsis hospitalizations in the U.S. more than doubled, from 621,000 to 1,141,000 [3]. This trend is likely to continue due to the aging of the American population and the consequential decline in immune system efficiency, and the rise of antibiotic-resistant bacteria.

In one study of catheter-related bloodstream infections, hospital stays increased from 10 to 20 days, at an additional cost ranging from $4,000 to $56,000 per patient [4]. Moreover, the Centers for Medicare and Medicaid Services (CMS) considers those hospital-acquired infections as "never events," thus placing the entire financial burden of the care of those patients upon the hospital.

Understanding sepsis
Given these factors, it is not surprising that early recognition and treatment of sepsis has become a major focus for hospitals, and much of that focus also extends to EMS. In one study, EMS transported more patients with severe sepsis than patients with STEMI or stroke, of which 19.6 percent died in-hospital [5]. With early recognition and stabilization, and collaboration with receiving hospitals, EMS Sepsis Alert programs have the potential to significantly lower the morbidity and mortality of sepsis [6].

Sepsis is defined as Systemic Inflammatory Response Syndrome (SIRS) in the presence of infection. This infection can be fungal, viral, or parasitic, but the overwhelming majority of sepsis cases result from bacterial infection.

EMS Sepsis Alert programs focus on recognition of patients in severe sepsis, which is defined as clinical indicators of SIRS, plus organ system dysfunction, in the presence of an infection. These SIRS clinical criteria include:

Most EMS Sepsis Alert programs require at least two of these criteria for activation. While analysis of WBC counts is out of the reach of most EMS systems, recognition of other SIRS criteria is easily accomplished by most prehospital providers from EMT to paramedic.

However, SIRS criteria alone are poorly specific for identifying severe sepsis [7]. In order to avoid "cry wolf syndrome" and unnecessary sepsis alert activations, we need another clinical criterion that reliably indicates a patient in extremis. Preferably, that criterion should be one that presents well before hypotension. In sepsis patients, even one episode of hypotension —even when quickly treated and stabilized —results in a measurable increase in mortality.

Clinical indications of metabolic distress
That clinical indicator of metabolic distress has been lactate monitoring. Lactate monitoring has been performed for years by athletic trainers and coaches, in order to tailor diet and training regimens to increase their anaerobic thresholds. The more an athlete can exert himself without his muscles shifting into anaerobic metabolism, the better he can perform.

For our purposes, a serum lactate level of 4 mmol/L is considered a reliable indicator of metabolic distress, and often presents itself well before hypotension occurs. Since our goal is not to treat septic shock but to prevent it, this becomes a useful monitoring parameter.

The problem is that the only lactate monitor on the market had a CMS Clinical Laboratory Improvement Amendment (CLIA) waiver because it was used on athletes and not patients. The waiver did not apply to uses for clinical decision-making. To date, no prehospital lactate monitors have been granted a CLIA waiver, leaving EMS systems reliant on lactate monitoring the choice of undergoing the prohibitively expensive process of becoming a CLIA-approved moderate complexity clinical laboratory, or finding a reliable surrogate for lactate monitoring.

Quantitative waveform capnography can be a reliable surrogate for lactate monitoring in detecting metabolic distress in sepsis patients.

When organ hypoperfusion occurs, serum lactate levels rise precipitously, and lactic acidosis follows soon thereafter. The body’s physiologic response is to increase respiratory rate to attenuate the metabolic acidosis. There is an inverse relationship between serum lactate levels and end-tidal CO2 (ETCO2); as lactate rises, carbon dioxide levels fall. ETCO2 levels have been shown to be an accurate predictor of mortality in patients with severe sepsis and septic shock [8,9] and Hunter, et al found that ETCO2 levels less than 25 mm Hg are strongly associated with serum lactate levels > 4 mmol/L [8, 9]. 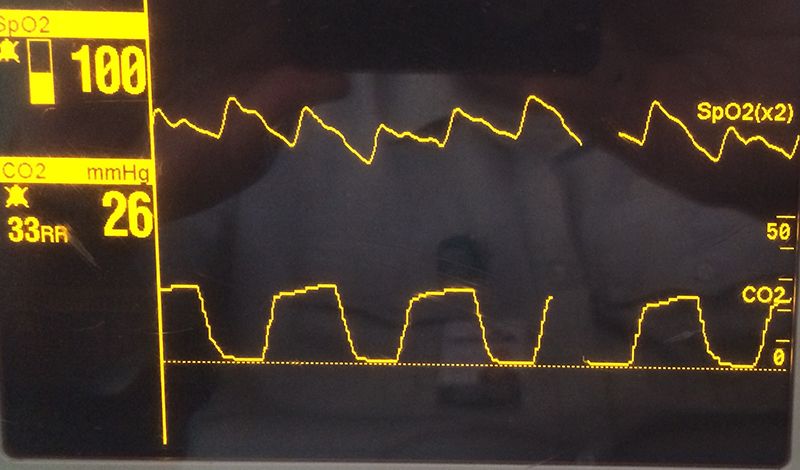 When assessing and treating a suspected sepsis patient, use quantitative waveform capnography in addition to two or more SIRS criteria to identify patients at risk for severe sepsis.

Identify and treat sepsis
While pre-existing pulmonary pathology such as asthma or COPD (especially CO2 retainers) can alter ETCO2 levels and complicate diagnosis of severe sepsis, careful evaluation of waveform morphology (normal waveforms and not the characteristic "shark fin" of acute bronchospasm) and a thorough history can help exclude those patients. In patients without such pathology, capnography can aid identification of severe sepsis.