Obstructive airway disease is a constellation of chronic respiratory illnesses characterized by obstructed airflow through the terminal bronchioles and alveoli, either due to inflammation, obstruction by mucous and secretions, or loss of surface area for gas exchange from atelectasis. Asthma, bronchiectasis, emphysema, chronic bronchitis and cystic fibrosis all fall within the obstructive lung disease spectrum.

EMS assessment and treatment of asthma: 5 things to know

Asthma, a leading cause of respiratory compromise, can be assessed with capnography and effectively treated with BLS and ALS medications

Of these, asthma is the most common chronic disease among children, and asthma affects nearly 235 million people of all ages worldwide [1]. In the U.S., roughly 25.5 million children and adults suffer from asthma, 9.8 percent and 8.0 percent of the population, respectively [2, 3].

Despite advances in treatment and disease recognition decreasing mortality rates in recent years, and the fact that 50 percent of young children with an asthma diagnosis will no longer experience symptoms after they reach adolescence, the prevalence of asthma continues to grow, increasing from roughly 20 million (7 percent) in 2001 to 25 million (8 percent) in 2009.

The surge in asthma diagnoses was starkest among black children, who experienced an increase in prevalence of nearly 50 percent from 2001 to 2009 [5].

The economic burden of asthma is significant, costing every diagnosed patient an average of $3,300 a year. The cost of asthma care in the United States rose 6 percent between 2001 and 2009, from $53 billion to $56 billion annually [5].

Understanding asthma
Asthma is a lower airway disease whose primary symptoms are dyspnea, wheezing and chest tightness, resulting from narrowing and spasm of the terminal bronchioles. The inflammation and excess mucous production prevalent in asthma exacerbation results from the release of cytokines and other inflammatory mediators. These cytokines, released from eosinophils, which are disease fighting white blood cells, are not present in the respiratory tract in significant numbers in non-asthma patients. Cytokines directly stimulate inflammation of bronchial smooth muscle and production of mucous from goblet cells, as well as trigger the activation of yet more eosinophils. The outcome is a hyper-reactive airway that results in acute bronchospasm when exposed to one of the many asthma triggers.

In acute bronchospasm, air becomes trapped in the terminal bronchioles and alveoli after gas exchange, resulting in an increase in functional dead space. This trapped air must be forcefully exhaled — normally the passive phase of the respiratory cycle — resulting in the characteristic expiratory wheeze of asthma exacerbation, as well as markedly increased work of breathing. Some asthma patients, particularly children, present with forceful, persistent coughing, another form of forced exhalation, rather than wheezing. As the airway lumen narrows further and mucous plugging occurs, flow is further restricted, resulting in inspiratory wheezing, and in severe cases, silent asthma.

Asthma assessment and treatment
The primary goal in EMS treatment of asthma is to reverse bronchospasm with Beta-2 agonist and parasympatholytic bronchodilators, with a secondary goal of reducing inflammation, typically with corticosteroids.

Assessment of acute bronchospasm in the field, however, is often complicated by the austere nature of the EMS work environment. High ambient noise, distractions from agitated family and bystanders, anxious and hypoxic patients unable to provide a complete history, and lack of access to more sophisticated testing methods can make the process quite challenging. While it may be fairly straightforward to recognize the presence of acute bronchospasm, quantifying the severity of it — and modifying treatment accordingly — can often be difficult.

In the hospital, two indices are used to gauge the severity of an asthma attack: spirometry and measurement of arterial blood gases (ABG). Each of these methods can be quite useful, but they also have their limitations.

Spirometry is a measure of expiratory airflow that can quantify Forced Vital Capacity (FVC), the amount of air you can exhale, and forced expiratory volume (FEV), how fast you can exhale that amount. Both of these parameters are useful for gauging the effectiveness of treatment and as clinical parameters for hospital discharge. However, spirometry relies entirely on full patient cooperation — not always a sure thing — and cannot provide a continuous, breath-by-breath measurement of airflow.

Measurement of arterial blood gases allows clinicians to gauge the degree of hypoxia and or hypercarbia present, but it is an invasive procedure with all of the associated inherent risks; such as infection, pain, and interruption of arterial flow. Also, arterial blood gases are usually normal in asthma patients who are not in acute bronchospasm, thus making it a poor clinical parameter for hospital discharge.

Using waveform capnography as an asthma assessment tool
In the prehospital environment, where EMS providers rarely have access to ABG measurement and spirometry, quantitative waveform capnography can serve as an accurate, noninvasive parameter useful in both initial assessment and in gauging the effectiveness of therapy in the asthma patient [6].

While the focus here is on asthma, these techniques are applicable to all causes of acute bronchospasm, such as COPD, bronchiectasis and cystic fibrosis.

In the patient with normal pulmonary pathophysiology, the alveoli empty at a fairly constant rate until full expiration of respiratory gases, resulting in a nearly-vertical Phase II, and a relatively acute alpha angle.

In the acute bronchospasm patient, however, alveoli empty at a very uneven rate, resulting in a sloped Phase II and a flattened or even indistinct alpha angle. Often, Phase II and Phase III appear to "slur" into one another.

If significant air trapping has resulted in hypercapnia, the quantitative PetCO2 measurement at the beta angle may also be higher than normal. This results in the characteristic shark fin waveform seen in acute bronchospasm. 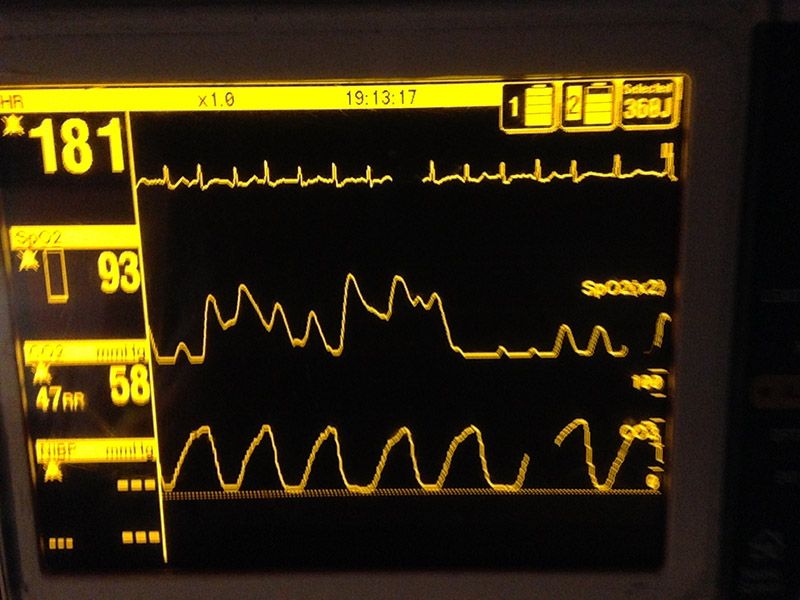 Normal arterial carbon dioxide (PaCO2) is 35-45 mm Hg, and studies have demonstrated strong concordance between arterial and alveolar expired carbon dioxide [7]. Even in the patient with acute bronchospasm, PetCO22 is typically within 1 mm Hg of PaCO22.

Flattening of the alpha angle and increased slope in Phase II and Phase III, while not exactly correlated with peak flow measurements obtained in spirometry, have been demonstrated to accurately reflect the degree of bronchospasm and airway narrowing in asthma patients [8, 9, 10].  Waveform capnography, while not yet a replacement for spirometry, does provide a continuous, breath-by-breath monitoring parameter independent of patient effort that spirometry does not.

By using quantitative waveform capnography as an adjunct to history and physical assessment, paying particular attention to the slope of Phase II and III, flattening of the alpha angle, and presence of hypercapnia, the EMS provider has a powerful tool to aid in assessing and treating our asthma patients.