How EMTs can get more from a cardiac monitor

My formative years in EMS were spent at a mom-and-pop ambulance company with a lot of heart and very little else.

Blessed with a medical director who trusted his medics to think for themselves and protocols to match, I learned to get the most out of the equipment we had, and that technology is an adjunct to education, not a replacement for it. In fact, my first conference lecture was how to do 12-lead acquisition using a 3-lead monitor.

But one thing they never taught me back in paramedic school, nor in myriad continuing education sessions since, was the utility of a plethysmography waveform. The most I knew was not to trust a numeric SpO2 reading that wasn’t backed up by a regular pleth waveform that matched the indicated heart rate on the monitor.

Well, thanks to a couple of contributors, I have learned to milk a little more utility out of my cardiac monitor, and I’d like to pass those tips along to EMS1 readers.

For those of you not familiar with the term, plethysmography is the measurement of volume changes within an organ or extremity. The way your cardiac monitor typically accomplishes this is via the built-in pulse oximeter, which measures transmission of specific light wavelengths — red for oxygenated hemoglobin and infrared for deoxygenated hemoglobin — through a capillary bed.

The pulse oximeter calculates the ratio of oxygenated vs deoxygenated hemoglobin that reached their respective sensors, and spits out a pulse oximetry reading expressed as a percentage. The graphic representation of the changes in volume of that capillary bed derived from those sensors is known as a photoplethysmogram.

And as it turns out, if you understand the shape and significance of that plethysmograph waveform, you can glean quite a bit of information about your patient’s cardiovascular status.

A good, normal pleth waveform has evenly spaced, equally wide waves of equal amplitude. If your pleth doesn’t look like this, check to make sure the sensor is clean and in good contact with the patient’s skin. Be aware that if the patient’s rhythm is irregular, the pleth waveform will be as well. 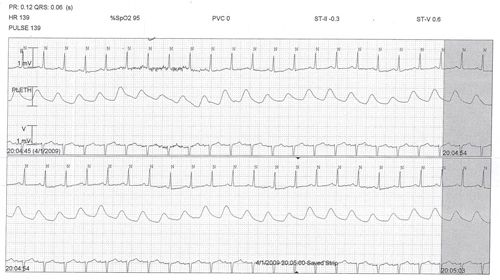 The image here is actually pulsus paradoxus, which is essentially the same thing but from a different source. While decrease in pleth amplitude in hypovolemia is caused by the inability of the great vessels to compensate for negative intrathoracic pressure, in pulsus paradoxus the decrease in amplitude is caused by the same mechanism within the pulmonary vasculature.

Jeff goes on to note that the plethysmograph waveform can also be used to determine whether ectopic beats are perfusing. In my paramedic classes, my students (because medic students tend to obsess over minutiae when they might see it on a test) always wanted to know if they were supposed to count the ectopic beats on a monitor strip when calculating a heart rate.

The stock answer I got as a paramedic student, and the one I passed on to my students was, “If it perfuses, then count it. Check a pulse, and if the ectopic complex generates a palpable beat, then it should be counted in the heart rate.”

With a plethysmograph waveform, you need not spend the entire transport with your fingers on the patient’s wrist to determine the same thing. 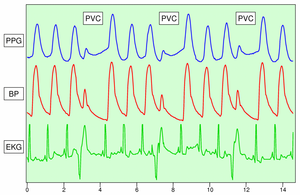 Note the puny little waves associated with those PVCs? That’s an indicator that the PVC was non-perfusing. Paramedic Dominick Walenczack put Jeff’s tip to good use on an actual call. As Dominick relates the tale:

I got sent for a ‘visiting nurse reports bradycardia, evaluation requested.’ So, I walk in and take a radial pulse, thinking to myself ‘Oh really? Bradycardia... we'll see about tha -- Holy! That's bradycardia!’ I placed the patient on the monitor. Her rate was in the 80’s, but it wasn’t corresponding with the patient's pulsatile rate. It seemed some beats were not perfusing... but which? There was an odd clumping of beats. Using Jeff's pulse oximetry information, I swapped to a SpO2 plethysmograph. And, clear as day, I had definitive, recordable confirmation that the second of two beats was non-perfusing. Monkeying about with the EKG filters revealed that the rhythm was primary ventricular demand pacemaker with a non-perfusing antidromic PVC from the paced beat (presumably via an accessory pathway).

This was verifiable evidence that objectively recorded a palpated radial pulse, which came in handy when triage placed the patient in ED overflow because his monitor rate read 80. By taking the strip with plethysmograph to the attending, I could visibly demonstrate his perfusing rate was actually 40, and an ED bed was made available for the patient immediately.

So yes, it's more than just a ‘nice to know.’ It can impact patient care for the best.

So there you go. That’s two sharp medics who know how to make their monitor stand up and do tricks, with patient care improved as a result. That’s my kind of clinical tip!

Kelly Grayson, NRP, CCP, is a critical care paramedic in Louisiana. He has spent the past 24 years as a field paramedic, critical care transport paramedic, field supervisor and educator. He is president of the Louisiana Society of EMS Educators and a board member of the LA Association of Nationally Registered EMTs.