It's more common than a heart attack. It takes more lives than any cancer. It causes the deaths of over 4,400 children per year in the United States. Yet if you asked most health care providers to rate their top five medically preventable causes of death, sepsis probably wouldn't even make the list [1, 2].

With sepsis responsible for more than 1 million hospital admissions per year in the United States, at a cost of over $20 billion and increasing at almost 12 percent per year, it is no wonder that there is an enormous effort to get this challenging but preventable problem under control [3, 4].

The term sepsis was first coined by Hippocrates in the fourth century, but at the time it referred simply to the breakdown of living tissues [5]. Now, known more commonly as blood poisoning, scientists and clinicians have been trying to come up with better definitions and criteria for sepsis for more than 25 years in an effort to advance the fight against this deadly disorder [5].

"Sepsis is caused when the body’s immune system becomes overactive in response to an infection, causing inflammation which can affect how well other tissues and organs work. When sepsis is recognized early, people can be quickly given the right treatment. However, the signs and symptoms of sepsis can vary and may be subtle which can lead to it being missed if it is not considered early on."
- National Institute for Health and Care Excellence (NICE) Guidelines [6]

Sepsis has a high mortality rate, variable clinical presentations and few unifying features technically making it a syndrome, a group of body dysfunctions that are commonly found together and that typically progress together, often in a predictable way, but the cause remains a mystery, not a disease where the underlying cause or causes are known.

How EMS can make a difference

EMS providers familiar with anaphylaxis can think of sepsis as progressing in a somewhat similar way. There is an initial injury (say, a bee sting for anaphylaxis or a bacterial infection for sepsis).

While the initial injury is bad, what’s worse is that it triggers an overreaction of the body's normal immune system (different pathways for sepsis and anaphylaxis, but both are inappropriate over-responses) ultimately resulting in organ dysfunction and cardiovascular collapse (again, the pathways are different but the end results are similar).

Perhaps the biggest difference an EMS provider will notice is that anaphylaxis occurs very quickly and can often be unavoidably obvious. Sepsis tends to progress more slowly, with signs and symptoms that are much more subtle right up to the point of complete cardiovascular collapse.

Fortunately, early recognition of sepsis by sharp EMS providers has been shown to improve time to treatment and early treatment of patients has been shown to greatly improve outcomes [7-13]. However, the challenge is not just that the signs and symptoms can be subtle and easily missed; many physicians disagree as to exactly what clinical indicators to look for. That's where the shared definition and agreed-upon clinical criteria are helpful.

The 1991 Chicago Consensus Conference was the first to formally define sepsis, simply calling it, "the systemic response to infection [14]." The clinical criteria were also relatively simple with a diagnosis of sepsis based only on the presence of known or suspected infection and presentation of Systemic Inflammatory Response Syndrome (SIRS) [14], which is defined by the presence of these exam findings.

This provided a framework for clinical health care providers and researchers to both raise awareness of and begin the fight against sepsis.

The 1991 conference went on to classify the severity of sepsis, categorizing it in order of increasing severity as sepsis, severe sepsis and septic shock. While this was a step forward in formally codifying sepsis so that it could be studied and treatment improved, many health care providers were still left confused.

In 2001, The Washington Consensus Conference attempted to clarify things with new diagnostic criteria for sepsis. In addition to the SIRS and other criteria, the Sepsis-related Organ Failure Assessment score (SOFA) was proposed to better identify the presence and degree of sepsis the patient may have [15, 16].

Unfortunately, these broad definitions and complex criteria still fell short when it came to the identification and treatment of patients with sepsis, especially in the emergency department and the prehospital arena. They simply weren't designed to be used to rapidly identify and begin treatment of patients with sepsis in the field. In addition, they were criticized for still falsely identifying some patients who did not have sepsis while missing some patients who actually did. Calls for the redefinition of sepsis with more user-friendly bedside criteria began as early as 2013 [17, 18].

The Washington Consensus Conference has now attempted to clarify things with a new 2016 definition of sepsis and new diagnostic criteria to improve clinical care, research and reporting of sepsis [19].

"Considerable advances have since been made into the pathobiology (changes in organ function, morphology, cell biology, biochemistry, immunology, and circulation), management, and epidemiology of sepsis, suggesting the need for reexamination."
- The Third International Consensus Definitions for Sepsis and Septic Shock (Sepsis-3)

The recommended definition and clinical criteria of sepsis from this conference is "Life-threatening organ dysfunction caused by a dysregulated host response to infection [19]." While "suspected infection" is left undefined, the clinical criteria for organ dysfunction are "a Sequential Organ Failure Assessment (SOFA) score of 2 points or more [19].

Since this criteria was developed by critical care physicians typically working in academic hospitals, it is not surprising that the clinical criteria rely on a SOFA score that includes factors such as PaO2, bilirubin and creatinine levels and coagulation labs. Recognizing the need for some type of quick bedside assessment that did not rely on such labs they also developed the quick SOFA or qSOFA score, more suitable for EMS. The qSOFA score consists of:

Thus, suspected infection plus two or more of these should be enough to begin sepsis care and coordination with specialty staff.

This definition and clinical criteria were based on systematic reviews, surveys and cohort studies as well as a great deal of discussion of those directly involved in the task force [19]. While the SOFA score has existed for some time, the qSOFA score is new and was developed and validated only retrospectively. Although it is intended for use outside of the intensive care unit, there has been no prospective analysis of its use in the emergency department, in EMS, or anywhere else as of yet.

Pros, cons and room for improvement

This update is intended to replace previous definitions, offer greater consistency for studies and clinical trials and ultimately assist in early recognition and timely treatment of patients with sepsis. However, it has come under scrutiny by a great number of individuals and organization evaluating its relative pros and cons [20, 21]. While the Sepsis 3.0 definition and criteria have been peer-reviewed and endorsed by 31 international professional societies, it has notably not been endorsed by ACEP, SAEM and has even been criticized by the ACCP and the UK Sepsis Trust [22, 23].

EMS systems may not need to jump to replace existing sepsis alert criteria with Sepsis 3.0. Likewise, simply because the qSOFA criteria focus on blood pressure, altered mental status and tachypnea does not mean that other clinical criteria such as ETCO2, urine output, serum lactate and more are no longer valid assessment criteria associated with sepsis. 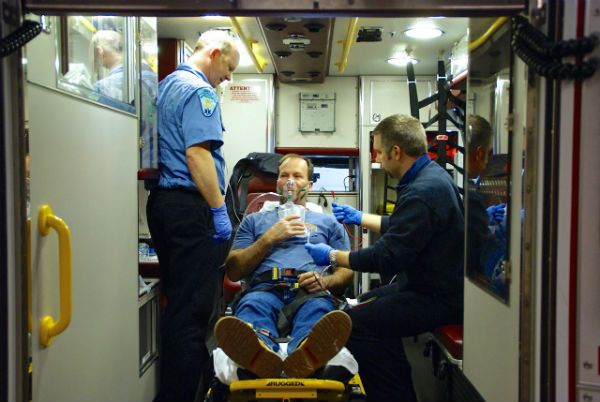 None of these criteria, including the qSOFA test, serum lactate, or ETCO2, produce a definitive diagnosis of sepsis. What they do is help EMS providers begin early treatment based on local capabilities, resources and protocols as well as alert and coordinate with in-hospital specialty resources to provide sepsis emergency care.

The Mervyn Singer, MD, co-chair of the Sepsis Definition Task Force, says that qSOFA was devised to give, "the ability to rapidly differentiate/distinguish the risk patient [24]."

For EMS providers working in systems with no current sepsis alert, this would be a great time to begin one without having to reinvent the wheel. EMS providers with existing sepsis alert systems must carefully consider the return on investment they will get in changing their system and retraining their providers.

Change or no change, this is a perfect time to refresh providers on what is known about sepsis, especially that extra care is needed in assessing the very young, the very old and those particularly susceptible to infections due to impaired immune systems from chemotherapy, chronic steroid use, splenectomy, or sickle cell disease, placement of indwelling devices and catheters, recent trauma or surgery, breach of skin integrity from wounds and burns, IV drug abusers and women who have recently given birth or had a termination of pregnancy or miscarriage.

Sepsis 3.0 will continue to generate a good deal of commentary and discussion in critical care and emergency medicine for some time. The consensus statement itself identifies that this is only one step in an iterative process, yet hopefully we will not have to wait another fifteen years for Sepsis 4.0.

Guidance remains desperately needed for sepsis recognition and treatment in specific sepsis subcategories, most notably pediatrics which has not been updated in over ten years [25]. Meanwhile, the next big step for sepsis appears to be the National Institute for Health and Care Excellence (NICE) clinical guideline on sepsis due out in July, 2016 [6]

While no field usable, sepsis specific tests are on the horizon, new procalcitonin tests are currently in the works. Procalcitonin is released into the bloodstream when there is a bacterial infection in the body. High levels of procalcitonin may show that a patient has a significant infection.

Finally, while advances in treatment for the syndrome of sepsis may seem slow, it was not that long ago that treatment for cancer, a syndrome as it was then known, was also less than desirable. Eventually, underlying causes were identified raising cancer to the category of disease. Biomarkers and tests were developed, ultimately leading to targeted cancer treatment geared to the physiological dysfunction specific to the individual patient resulting in more lives saved.

While some argue that Sepsis 3.0 is more of a stumble than a solid step, there is no doubt that for EMS and for medicine in general, sepsis care continues to move in the right direction.

6. National Institute for Health and Care Excellence. NICE consults on guideline to speed up recognition and treatment of sepsis. NICE (2016).

7. Kumar, A. et al. Duration of hypotension before initiation of effective antimicrobial therapy is the critical determinant of survival in human septic shock*. Critical Care Medicine 34, 1589–1596 (2006).

14. Bone, R. C. et al. Definitions for sepsis and organ failure and guidelines for the use of innovative therapies in sepsis. The ACCP/SCCM Consensus Conference Committee. American College of Chest Physicians/Society of Critical Care Medicine. in 101, 1644–1655 (1992).

Rom Duckworth is a dedicated emergency responder and award-winning educator with more than twenty-five years of experience working in career and volunteer fire departments, hospital health care systems, and public and private emergency services. Currently a career fire captain and paramedic EMS coordinator, Rom is an emergency services advocate, and contributor to research, magazines and textbooks on topics of leadership, emergency operations, and educational methodology. Rom is a frequent speaker at conferences and symposia around the world and can be reached via RescueDigest.com.