Every day on our way to work or out the front window of the ambulance, we see a multitude of bad driving behaviors: distracted driving, speeding and aggressive behavior. Civilian drivers regularly and casually put their lives at risk, simply driving around town.

Now add the adrenaline rush of a lights and sirens response to a pediatric drowning call and the casual risks that much of society has accepted as a norm, become a recipe for disaster for EMS personnel driving an ambulance.

So how does an EMS organization effectively manage this risk?

In 2014, MedStar Mobile Health Care recognized that the training and safety initiatives in place at that time were not sufficient to manage the driving behavior of the current workforce. Annual fleet mileage was increasing by five percent year over year and with it, came increases in collision rates and repair costs.

With a consistent growth in call volume, reducing the mileage wasn’t an option so MedStar had to produce a dramatic shift in its driving culture.

At MedStar, safety is the first value in our value system, STARCARE [1], because safety plays a significant role in the success of our mission to deliver high-quality health care to our community. With a fleet of nearly 60 ambulances and 15 support vehicles, driven by more than 300 field staff it is imperative that we train, monitor behavioral drift and set high standards for those that drive a MedStar vehicle.

With a large millennial work force, we have had to evolve our training and education to maintain its efficacy and engagement. Classroom training with long lectures and PowerPoint presentations have been the most common delivery model for driver training. Unfortunately, long lectures don’t hold the interest of the younger learner — or any age learner — so we needed to find new ways to augment and adapt our training so that it remained relevant and effective.

Traditional classroom training remains a key component of any driver training to cover basic procedures and expectations. Knowing that we had to change our delivery, however, we decided to start our overhaul at the first step in driver training.

MedStar has traditionally used the CEVO program. We began augmenting this training with several real-life scenarios captured on camera to show true outcomes of both bad and good driving habits, like this crew clearing an intersection.

To keep the students’ attention, we incorporated some entertaining videos as well.

In addition, we replaced training diagrams with drone flyovers of the driving course to better demonstrate how to navigate a complicated driving scenario.

The only drawback, however, is that we found students seemed to be more interested in the drone than the content of the video.

Finally, we refreshed our field training officers in driver behavior to set a higher standard for the individuals tasked with preparing new candidates for a generally autonomous career. It is important that FTOs maintain a high level of proficiency and professionalism to sustain a positive culture in any organization.

Drivers drift back to bad habits without regular training

After an analysis of driver tenure, we found that team members would sometimes have a small collision the first year, but then by three to four years, their risk of a major collision began to increase. This told us that drivers were initially retaining what we taught them, but would drift back into bad habits without effective management. This is where MedStar made the most dramatic changes to improve driver behavior and vehicle safety.

We reinstated annual driver training as a general reminder of MedStar’s expectations. Training is presented online with a focus on the 12 FailSafe Standards including video examples and a narration from the safety team.

Finally, a monthly safety newsletter is produced and distributed on paper and electronically. In the newsletter, we include quick articles about driver safety and any recent shifts in our collision trends. We intentionally keep these articles short and to the point.

In a service area of 436 square miles and growing, it was exceptionally difficult for our supervisors to effectively monitor or manage team member driving. While increased training and a constant focus on driver education helped, we also needed a way to manage behavioral drift.

As a driver becomes more comfortable behind the wheel, they start to forget the carefully developed protocols and procedures designed to keep them and the community safe. Day after day, nothing bad happens and the tolerance for risk begins to rise. This erosion from safe procedures to shortcuts and risk tolerance is known as behavioral drift.

To help manage this, MedStar partnered with Lytx to incorporate video telematics into our system. We placed a DriveCam event recorder in every MedStar vehicle, including the executive's take home vehicles.

The DriveCam event recorder is constantly on, but it only saves the video file if the unit is triggered by excessive forces, high speed or manually triggered by the vehicle occupants. The leadership team initially received some pushback from the front line team members about a camera being placed into the ambulance cab so it had to be strategically deployed.

First, cameras were installed only in supervisor and administrator vehicles. This allowed us to generate some videos to prove the concept and allowed for a safe environment for the team members to ask questions.

With any driver safety system, however, comes the challenge of system management. Simply putting a camera into a vehicle will produce some changes initially through the Hawthorne effect, but if you don’t stay actively engaged, drivers will quickly fall back into old habits.

Our field supervisors were all given access to the DriveCam system and have taken the role of DriveCam coaches. If a video is recorded and there is a coachable behavior found, such as following too closely, speeding or not wearing a seat belt, the coach meets with the team member to show them the video and remind them of the driving expectations.

This one-on-one engagement has generated tremendous improvements in driving behavior which has led to significant reductions in collision rates and bent metal repair costs.

As with any safety program, we found we were spending a lot of time and effort on about 10 percent of our team members. Driving safety is important to all of our drivers, not just the bad drivers, so we decided to gamify the system to extend engagement to everyone.

Paramedics see some pretty wild stuff when they’re out driving around. Some of our personnel started manually capturing some of these events on the DriveCam event recorder and then would rush into the safety office at the end of their shift to ask, "did you see my video? Can I have a copy?"

We wanted to take advantage of this opportunity and perhaps use it to further motivate a shift in the culture. Instead of using the camera to simply watch for bad behavior, we actively pursued good behavior.

We started with a scavenger hunt. Team members were given a list of driving behaviors, such as looking far ahead, parking on an MVC and several fun items like dancing with citizens or wild chickens and were asked to manually trigger the camera to record examples of these items.

There was a tremendous response from the field members to the scavenger hunt and we began sharing the videos in our safety committee meetings, greatly increasing the attendance at the meetings.

When the scavenger hunt was finished, we kicked off our first DriveCam Emmy’s with awards for "Top Musical Performance" and "Top Safety Behavior." We had a flood of great submissions and these became a big hit at the safety committee meetings, further driving participation.

At the end of the year, we sent a survey out to the organization for everyone to vote on their top selections for each category. Winners were announced at the holiday party and were given small Emmy-like trophies with great fanfare.

Each year, the National Safety Council recognizes employers who have demonstrated a commitment to improving traffic safety with the "Our Driving Concern: Texas Employer Traffic Safety Award." Due to the successful initiatives and changes made at MedStar, this year will mark the second year that MedStar Mobile Healthcare has received this award. MedStar was among the top four recipients that were recognized with the "Exemplary" distinction.

Additionally, EMT Danielle Condra-Gantt, was recognized by Lytx in an international competition as one of their top three drivers in the government category.

Through the driving initiatives, we have been able to reduce the collision rate to 0.25 per 100,000 miles driven. This includes any collision that causes greater than $500 in damage. That represents a 73 percent reduction in bent metal repair. 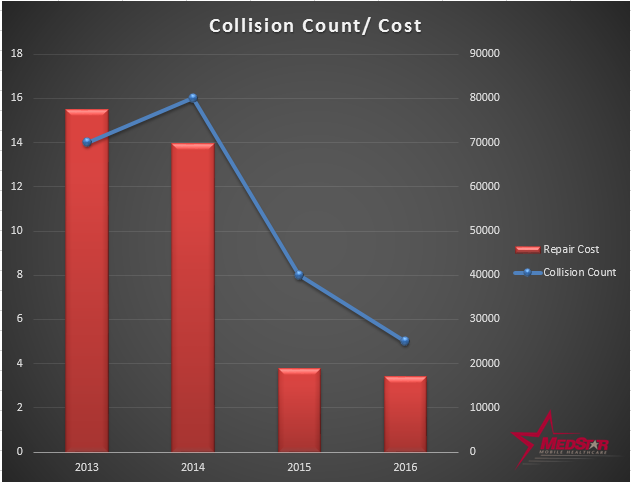 Employers have a unique opportunity to provide a high level of driver training, often far exceeding what most folks have when they’re given the keys to their first vehicle. While it is important for leaders to reduce risk within an organization by offering effective training, the value of this education extends beyond the work place. The safer habits that drivers establish at work don’t go away when they punch out at the end of the day. They are retaining these habits making not just them safer, but their families, friends and our communities safer.

As a public safety employer our mission is to help create a safer community. What are you doing to manage behavioral drift and create safer drivers on and off duty?