Rob Lawrence joins hosts to celebrate 7 years of 'Inside EMS'

Where does it hurt?

Q&A: An employee praise and recognition program with measurable results

Evaluation of a treatment: Ketamine

Calling all volunteers: 3 ways to increase the volunteer member pool

Jarvis, Pickett and Vithalani: After-action report – The Texas blizzard of 2021

Reality training: Every patient move is a high-risk move

From EMS provider to taxi driver: The abuse of the 911 system

When resources are squandered, and real emergencies happen, people die

It took some time for me to realize that we had lost the war.

Of course, my service could charge anything they wanted; the people who call 911 for stubbed toes during blizzards have zero intention of paying anyway, but I digress. Somehow, the nation's 911 system has been turned into a socialized transportation program that entitles people savvy enough to utilize the resources at their disposal the right to beckon trained and courteous medical professionals to their homes, places of employment, or anywhere they may be.

And we, the providers, happily go along with the debacle. It is far easier to give in, and take the people who call us in, than to argue, explain, lecture or refuse transport. It's a game we play now, and I call it “Getting Through the Shift.”

Ninety percent of 911 calls are for non-emergencies. Of that 90%, maybe half probably would benefit from some kind of professional medical evaluation and treatment, but could find the means to get them to the treatment they desire on their own. The other half would be just as safe if they opened their medicine cabinets and used peroxide, aspirin, Tylenol or a Band-Aid. Of course, many believe that the government should provide these things. The local pharmacy charges for Band-Aids, but 911 does not – unless you are dumb enough to pay the bill. 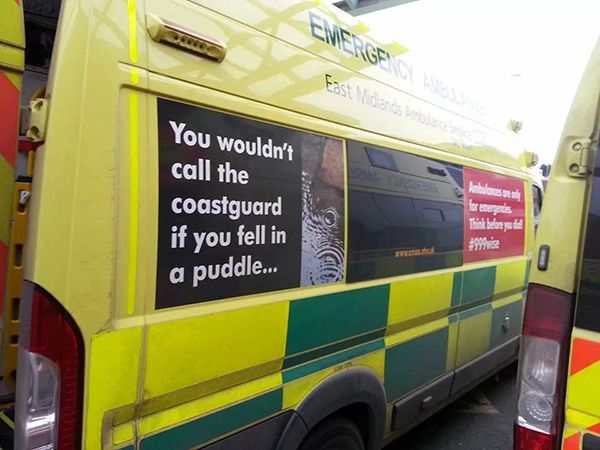 "Ambulances are only for emergencies. Think before you dial!" (via imgur.com)

Here are a few random examples of 911 calls we respond to every day, everywhere:

9. I tasted nail polish remover and it's eating my tongue.

8. I broke up with my boyfriend and feel sad.

6. I took some vitamins and now I can't stop kicking the wall.

3. I need a breast reduction.

These examples are nothing new to those of us in the trenches and the people we complain to. But there are vast amounts of people who have no idea just how badly they are being taken advantage of. When resources are squandered, and real emergencies happen, people die. It‘s all fun and games taking people to the hospital in an advanced life support vehicle for foot pain – until the cardiac arrest happens while you are tied up with a non-emergent person.

While the nation's EMS crews are running around town like idiots, caring for people who have no business calling 911, other people are dying, and that is a fact. It is absolutely absurd how we allow so much of the populace to squander our vital resources. One popular answer to the problem is to add MORE resources to cater to an abusive public. A common complaint heard among overworked EMTs and paramedics is “we need more crews.”

I answered 911 calls for nearly 25 years. When I left EMS, my truck responded to well over 6,000 calls a year. Maybe 500 of those rescue runs made a difference in the person who called us in regards to their overall health and wellbeing.

The rest? We made absolutely no difference at all. And the beat goes on. Until it doesn‘t, because the closest ALS unit is busy transporting a perfectly healthy but crying infant to the ER.

NY EMTs robbed at gunpoint while responding to fake 911 call

4 patient assessment scenarios that are actually useful for EMS students